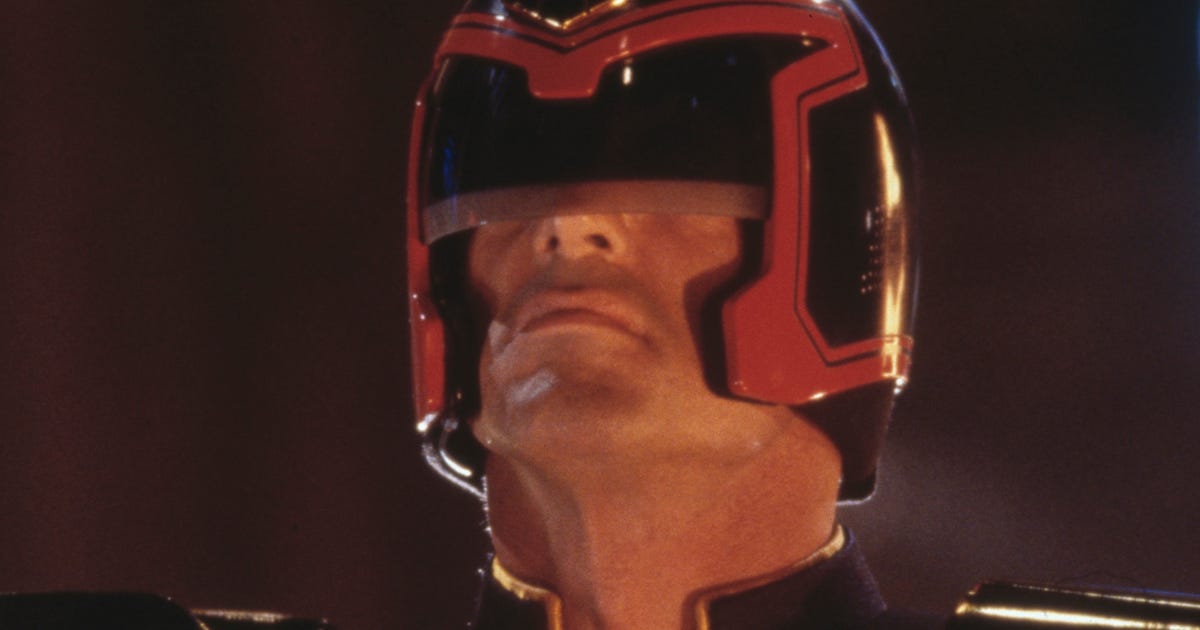 Most fans of iconic comic book character Judge Dredd would rather forget Sylvester Stallone’s 1995 movie adaptation, especially since Karl Urban came along and did it properly. Urban starred in a movie simply titled Dredd, released 10 years ago in September 2012, but with a proposed new TV version
supposedly still in the works, it’s worth remembering that both movies got some things right and other things very wrong.

Created by John Wagner and Carlos Ezquerra in 1977, unbending future cop Judge Joe Dredd is the flagship character in long-running British sci-fi comic 2000AD. The helmeted and stone-faced top cop of future metropolis Mega City One, Dredd has appeared on the big screen twice: in 1995, long before comic book characters became the dominant cinematic force they are today, Stallone headlined a cartoonish attempt to turn the character into a summer blockbuster. Fans and critics hated it.

Dredd was a much more gritty and grown-up version of the unsmiling lawman. Fans loved it, and have been calling for a sequel ever since. That movie certainly nails the lead character of Dredd himself, played by Urban a few years before The Boys. But for me — a fan who’s been reading 2000AD since I was a teenager — Dredd misses the mark everywhere else. To see those things done properly, we have to look to the 1995 movie, which got more right than you might remember.

Now, I’m not saying the ’95 Judge Dredd is a good movie. It could have been a perfectly enjoyable ’90s sci-fi action romp in the vein of Demolition Man or anything with Christopher Lambert in. But it’s fatally undermined by ripe dialogue, forced attempts at comedy and horribly misjudged casting.

However, if you look beyond the cast, the ’95 movie got a lot right.

The costumes, sets and vehicles in 1995’s Judge Dredd look fantastic (except maybe the codpiece).

For a start, director Danny Cannon was given enough cash to realize the visuals properly, and absolutely nailed the look of Mega City One. The sets, costumes and vehicles were fantastic. And the opening scene, in which returning citizens descend from a soaring sci-fi megalopolis to teeming, war-torn streets, was as succinct an introduction to Dredd’s turf as you’ll ever see.

But it’s not just about budget. The ’95 movie drew more more shrewdly on the comic’s abundant history than the 2012 version. From undead dark judges to mutated gorilla gangsters, from Soviet assassin Orlok to face-changing serial killer PJ Maybe, the comic has been stuffed with some of the most colorful, imaginative and complex villains seen in comics. What did the 2012 movie give us? A tower block full of scruffy junkies.

The villainous Mean Machine Angel is a triumph of pre-CGI physical makeup.

Frankly, the 2012 movie has nothing on the ’95 movie’s looming ABC warrior and grotesque Angel Gang, both triumphs of pre-CGI physical effects.

Fortunately, the format of a TV series has the scope to really explore the breadth and depth of Mega City One’s diverse denizens across multiple episodes. The series was first reported in 2017, but was recently said to be on hold due to the pandemic.

The ABC warrior robot, built for real on set, is genuinely scary.

The other thing the 2012 movie lacks is humor. Stallone clashed with the ’95 film’s director Danny Cannon over the comedy elements of the film, and it was horribly cartoonish. But looking at the humorless 2012 model, with its effing-and-blinding and grimly lingering close-ups of exit wounds fountaining blood and bone, Sly might have had a point.

Now, I enjoy a bit of the old ultraviolence as much as the next man. My life changed the moment I saw the cover of my first ever issue of 2000AD, which shows Dredd holding up a severed nose. But also on that cover is the strapline “Loser by a nose” — it’s that combination of pitch-black humor seasoning the extreme violence that makes Judge Dredd (and 2000AD) what it is. Joe Dredd himself may never crack a smile, but his straight-man act anchors a city and a future that get ever more ludicrous.

Speaking of ludicrousness: The ’95 movie had punk legend Ian Dury in it, the costumes were by Gianni Versace and The Cure did the theme song. Those are the kind of wild choices that made The Fifth Element so gloriously memorable two years later, and it’s the kind of absurdity that the 2012 Dredd movie sorely lacks.

Ultimately, the 2012 movie gets Dredd himself right, and Mega City One wrong. The ’95 movie got Dredd wrong, and everything else right. The new TV show needs to draw on both if it’s going to be a law unto itself.