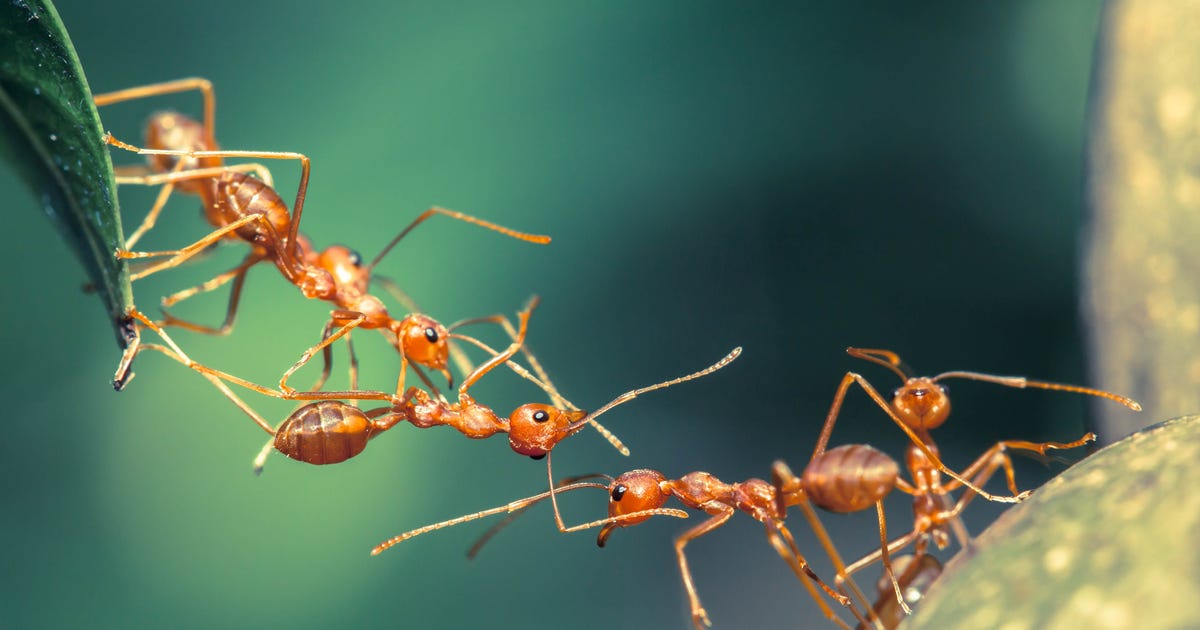 When Mark Wong set out to analyze 489 entomological studies spanning every continent, major habitat and biome on Earth, he had a simple goal: Count the ants. The journey to a final answer was long, and often tedious. Then, one day, Wong and fellow ant experts came out on the other side.

According to a new paper published Monday in the journal PNAS, the international team of scientists suggests there are a whopping 20 quadrillion ants roaming our planet right now. That’s 20,000,000,000,000,000 of those six-legged worker insects you catch pollinating plants, dispersing seeds like little gardeners and salivating at the aftermath of a toasted bagel.

“We further estimate that the world’s ants collectively constitute about 12 megatons of dry carbon,” said Wong, an ecologist at the University of Western Australia’s School of Biological Sciences. “Impressively, this exceeds the biomass of all the world’s wild birds and mammals combined.”

To put that staggering quantity into perspective, multiply the team’s ant biomass estimate by five. The number you get equals just about the entirety of human biomass on Earth — and this might be a conservative estimate. Each of the 489 global studies was quite thorough — employing tens of hundreds of booby trap tactics like catching runaway ants in small plastic container ditches and gently shaking leaves to learn how many take shelter in crunchy homes. But as with most research endeavors, caveats remained.

Sampling locations, Wong explains, were unevenly distributed across geographic regions, for instance, and the vast majority were collected from the ground layer. “We have very little information about ant numbers in trees or underground,” he said. “This means our findings are somewhat incomplete.”

Why worry about counting ants?

Despite their diminutive size, ants carry quite a bit of might.

Aside from tunneling seeds into the ground for dinner and accidentally blooming plants from their leftovers, these buggers are integral to maintaining our ecosystem’s delicate balance. They’re prey for larger animals, predators of many others, soil churners and scavengers, to name just a few of their accolades. So considering the sheer amount of them gracing Earth, they’re a pretty big deal. “This enormous bulk of ants on Earth heavily underscores their ecological value, as ants can punch above their weight in providing key ecological functions,” Wong said.

But when it comes to counting ants specifically, as Wong did, there’s an urgency stemming from the rate at which our climate is changing. Scientists must quantify how many ants, as well as other animals and insects, exist on Earth because the climate crisis — a threat exacerbated by human activity — is forcing global temperatures to rise and therefore putting these organisms at risk of extinction.

We need people to rigorously and repeatedly survey and describe the ecological communities of different habitats before they are lost.

“We need people to rigorously and repeatedly survey and describe the ecological communities of different habitats before they are lost,” Wong said, emphasizing that the team’s recent work provides an important baseline for ant populations, so we know how these insects’ communities might change in tandem with a warming climate.

A worst case scenario of not counting up our fellow Earthling friends is sometimes called “dark extinction,” or anonymous extinction. It’s simply the worry that many species might disappear under the radar as the climate crisis worsens due to things like habitat loss or inhabitability.

Those animals on the road to extinction might not even be documented, let alone studied in detail.

In this regard, the team’s PNAS study opens with an apt quote from American biologist and ant specialist Edward O. Wilson: “Ants make up two-thirds of the biomass of all the insects. There are millions of species of organisms and we know almost nothing about them.”

Going forward, this is why Wong believes it’s important to regularly survey ant populations, and even expedite the process by outsourcing it to anyone able and willing to participate. “Things like counting ants,” he said, “taking photographs of the insects they encounter in their backyard and noting observations of interesting things that plants and animals are doing can go a long way.

“It would be great to have — as the eminent ant biologist E. O. Wilson once proposed — simply ‘more boots on the ground.'”