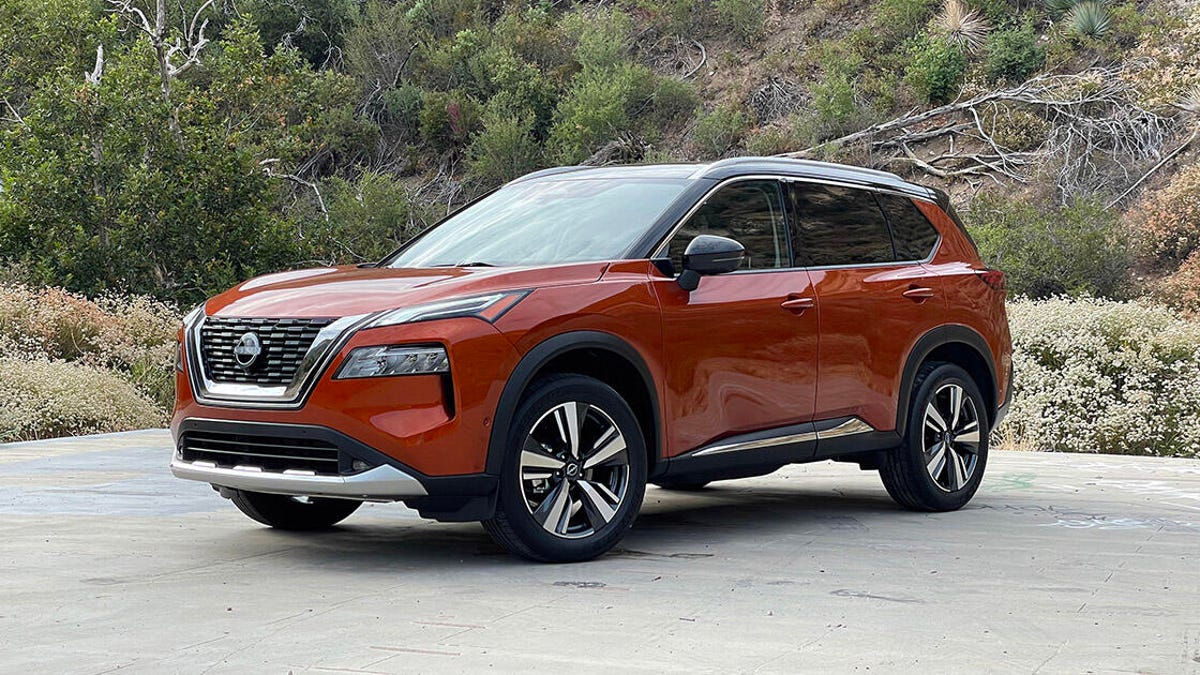 The Nissan Rogue gets a major improvement this year, but it’s not something you’ll notice right away. Peep under the hood and you’ll find a brand-new 1.5-liter turbocharged inline-3 engine — a small but mighty powerplant that gives Nissan’s best-selling SUV a nice bump in power while also returning better fuel economy.

This new triple uses the same variable compression technology as Nissan’s larger 2.0-liter turbo I4, an engine that’s optional in the Altima sedan and standard in the Infiniti QX50 and QX55 crossovers. Basically, varying the compression ratio allows the 1.5T to deliver more power at low revs and operate more efficiently while cruising. It’s a trick bit of win-win tech.

The specs back up these merits: The 1.5-liter I3 is rated at 201 horsepower and 225 pound-feet of torque, increases of 20 hp and 44 lb-ft over the 2021 Rogue’s 2.5-liter naturally aspirated I4. Meanwhile, fuel economy sees a 3-mpg improvement on the combined cycle, with a base, front-wheel-drive Rogue estimated to return 30 mpg city, 37 mpg highway and 33 mpg combined. A loaded, all-wheel-drive Platinum model like my tester drops those figures to 28 mpg city, 34 mpg highway and 31 mpg combined, but that’s still better than top-spec versions of the Honda CR-V and Toyota RAV4.

Nissan reworked the Rogue’s continuously variable transmission to complement the turbo engine, and while the changes aren’t radical, the CVT is both smoother and quieter than before. The Rogue has steering wheel-mounted paddles so you can fake shift through your fake gears if you feel like it, but leave the transmission alone and it’ll do its thing without any fuss. (Those paddles are best left untouched.)

The 2022 Rogue isn’t what I’d call quick, but it certainly accelerates with more authority than the 2021 model. In fact, the throttle might be a little too sensitive, delivering a quick jolt of power while pulling away from stops before mellowing out. Midrange thrust is acceptable — certainly better than the old 2.5-liter engine, at any rate. But the best thing about the 1.5T is that it doesn’t have the 2.0-liter VC-Turbo’s weird power peaks and valleys; the torque delivery is nice and linear aside from that initial jump. Plus, unlike other small-displacement I3s, the Rogue’s engine isn’t prone to harsh noises or unwanted vibrations, both at speed and while idling.

Around town, the Rogue is pleasant to drive. The suspension strikes a nice balance of city comfort without freeway floatiness, and the steering is appropriately tuned — nicely weighted but lacking feedback, not that 99.9% of Rogue buyers will actually care. Instead, these customers will appreciate the Rogue’s long list of standard driver-assistance tech, including forward-collision warning, lane-departure warning, blind-spot monitoring, rear cross-traffic alert and more. All Rogues except the base S come with Nissan’s excellent ProPilot Assist, which combines adaptive cruise control with active lane-keeping tech.

The Rogue’s multimedia setup is unchanged, meaning there’s a standard 8-inch touchscreen running Nissan’s sorta-outdated infotainment suite, with Apple CarPlay and Android Auto built in. A larger 9-inch screen is optional on SL and standard on Platinum trims, though the software within isn’t any better. CarPlay does connect wirelessly with the 9-inch screen, however, and the Platinum has a spiffy 12.3-inch digital gauge cluster, plus an optional head-up display.

Obviously my Platinum test car has all the bells and whistles, like quilted leather upholstery wrapping Nissan’s comfy-cushy Zero Gravity seats, a panoramic sunroof, heated seats and a heated steering wheel. But the Rogue’s interior is super nice overall. I love how the rear doors open a full 90 degrees, which is super helpful for people, but also great when I want to put bulky items on the back bench. The relatively boxy shape helps with overall cargo capacity, too, though the Rogue’s 74.1-cubic-foot measurement splits the difference between the smaller RAV4 and larger CR-V.

The interior is nicely appointed and quite spacious.

The third-generation Nissan Rogue is a pretty straightforward SUV. It’s not the best looking, most luxurious or most fun-to-drive crossover in the compact class, and unlike many competitors, there are no hybrid or plug-in hybrid options available. Even so, the Rogue is a solid all-around product that doesn’t really do anything poorly. That’ll likely keep it Nissan’s top-selling product, and the new turbo engine only enhances this SUV’s appeal.