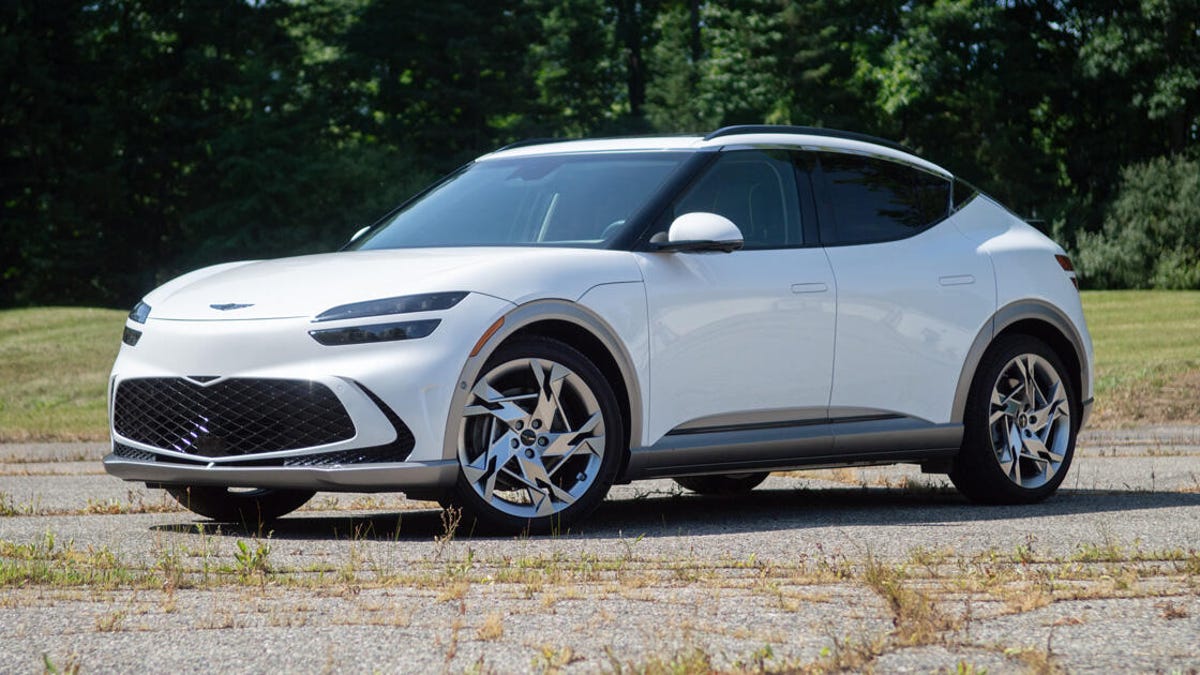 Hyundai Motor Group managed to strike gold three times in a row. The Hyundai Ioniq 5 and Kia EV6 are both brilliant midsize electric crossovers with unique styling and fun driving dynamics. Surely Korea can’t develop a third car on the same platform that stands out enough to warrant attention, right? Wrong. The 2023 Genesis GV60 is that third car, and it rocks.

The GV60 immediately pulls me in thanks to its styling. Smooth lines are the name of the game here, a contrast to its sharply angled siblings. My tester is clad in a $575 coat of white paint, which does make it look like an egg, but a cool egg. Genesis’ giant-ass maw is lower on the front fascia than on its gas cars, but it’s still there, and the dual-layer headlights and taillights also help keep the GV60’s looks within the family. There are a few crazy angles, but they’re used in limited amounts; the zag in the C-pillar looks pretty slick, and my tester’s 21-inch alloy wheels are among my favorites in the industry.

The GV60’s interior is even funkier. The Ioniq 5’s trick sliding center console may not be here, but you know what is? A metric boatload of blue Nappa leather and neon-green contrast stitching and piping. Most touch points are soft, or knurled, or otherwise visually interesting. The GV60 isn’t a car that takes itself too seriously, and I like that. And better yet, this stuff is all standard on the Performance trim, not an options package in sight.

There are some really neat elements inside the GV60, like the shift dial that flips over when the car is shut off, giving you an orb to ponder. The door handles are circular, but unlike a Mini’s, they’re ergonomic. The steering wheel has an enticing bright green “BOOST” button on it (more on that later). The rear seat cup holders are integrated cleanly into the doors’ armrests. The whole thing feels very well thought out.

Genesis and its parent company have long had one of the best in-car tech setups in the automotive industry, and the jump to electrification didn’t change that one bit. The GV60 comes standard with a pair of 12.3-inch screens. The left display is the digital gauge cluster, offering glances at pertinent information related to the car and its various safety systems. There’s a widget on the right side that lets me look at a few different things, whether it’s a map or vehicle info or whatever’s playing on the radio.

If you don’t like the way the menu is laid out from the factory, you can rearrange all these tiles so that your most used content is right in front of your face.

The right screen runs the latest iteration of Genesis’ infotainment system, which is a fancily reskinned version of what Hyundai and Kia offer. It’s responsive, intuitive, and I like that there’s a dial on the center console, in case you don’t want to gunk up the display. Apple CarPlay and Android Auto are standard, but it’s not wireless, although wireless device charging is standard on both trims, as are four USB-C ports split between both rows.

I saved the coolest bit of tech for last, though. When setting up a driver profile through the infotainment touchscreen, I have the option to include biometric information. A fingerprint reader inside and facial-recognition camera outside combine to provide a two-step authentication that allows the owner to operate the GV60 without a key or phone. It’s easy to use, it’s secure — in that the data never leaves the vehicle and cannot be accessed by anyone, even Genesis — and it frees up space in my pocket.

Whether or not a key is involved, the 2023 Genesis GV60 is a delight to drive. The GV60 is offered in two trims, both of which include two-motor all-wheel drive and a 77.4-kilowatt-hour battery pack. My tester is the sprightlier Performance trim, which puts out 429 horsepower and 516 pound-feet of torque, numbers that generate some exciting action in a midsize crossover. Remember that green “BOOST” button on the steering wheel? Smash it, and the wick gets turned up to 483 horsepower for 10 seconds. Electric torque’s instantaneous delivery is fun in every car, but man, the GV60 really gets going in a hurry.

The GV60’s ride quality could benefit from some slightly thicker tire sidewalls, but it’s still quite plush overall.

The GV60 Performance is a hoot to throw around on back roads, thanks in part to trim-specific upgrades like a mechanical limited-slip differential and an electronically controlled suspension. Spin the steering wheel’s drive mode dial to Sport and the vehicle stiffens up while the throttle adds sensitivity. Body roll is negligible, only really showing up at the ragged edges of grip. Leave the GV60 in the default Comfort mode, and it’s still fun to chuck about, but the suspension adds some give (a necessity in Michigan) and the right pedal takes a much-needed chill pill. I prefer the GV60 in its more sedate settings, where you can really max out the luxury vibe, something Genesis has been nailing for years now.

It’s not all roses and daisies, though. The brake pedal is extremely touchy at all times, no matter if regeneration is at its strongest or weakest, so I advise keeping it in one-pedal-driving mode (which, annoyingly, I have to enable every time I get in the car). For a car with “performance” in its name, the tires are seriously lacking; I understand low rolling resistance improves range, but the Michelin Primacy Tour all-season tires roast themselves under moderate acceleration and spirited driving on curvy backroads. Slap some proper summer tires on the GV60, and while range may take a hit, it should feel much better to drive.

Then again, range is kind of important here, as the GV60’s battery isn’t exactly winning any trophies. The GV60 Performance is rated at 235 miles, which is only a little worse than the 248-mile range on the base Advanced trim. The EPA claims the Performance model’s economy is around 2.71 miles per kilowatt-hour, a figure I’m able to beat without trying too hard. Over a couple hundred miles, I’m seeing between 2.9 and 3.1 miles per kilowatt-hour.

When charging the GV60, the pondering orb will not flip over to display the gear selector, preventing owners from driving off with the charging cable attached.

When it comes time to charge, the GV60 uses an 800-volt architecture, which allows it to utilize more power at high-speed chargers than most other EVs. Granted, it’s still limited to about 225 kW, so I never get the full 350 kW advertised at the fastest charging stations, but 225 is more than enough. Going from 10% state of charge to 80% in just 18 minutes isn’t bad at all, but if you’re one of those owners with an open 240-volt outlet, letting the GV60 charge overnight should provide all the juice you’ll ever need. Also, neat fact: If you hop back into the car while it’s charging and power it on, the orb won’t flip over to show the rotary gear dial. A little idiot-proofing never hurts.

The Genesis GV60’s higher price tag shouldn’t come as a surprise if you’ve seen the mass-market EV6 and Ioniq 5, both of which can be kitted into the mid-$50,000 range. The GV60 picks up a little past that point, starting at $59,985, including $1,095 for destination. My tester’s Performance trim is a fair bit above that; including the sole available option ($595 for fancier white paint), this thing rings in at $69,560. That’s about as much as you’d spend on a fully loaded Polestar 2 or Tesla Model Y. Those two may feature more power, but neither feels as luxurious as the Genesis.

Genesis really found a good niche with its unique take on luxury. Its cars are interesting throughout, with more than enough capability for the average owner, and a lack of confusing packaging makes ordering a much simpler affair. It’s hard not to recommend any Genesis, and the 2023 GV60 is definitely an impressive step as the automaker pushes to electrify its lineup over the next three years.