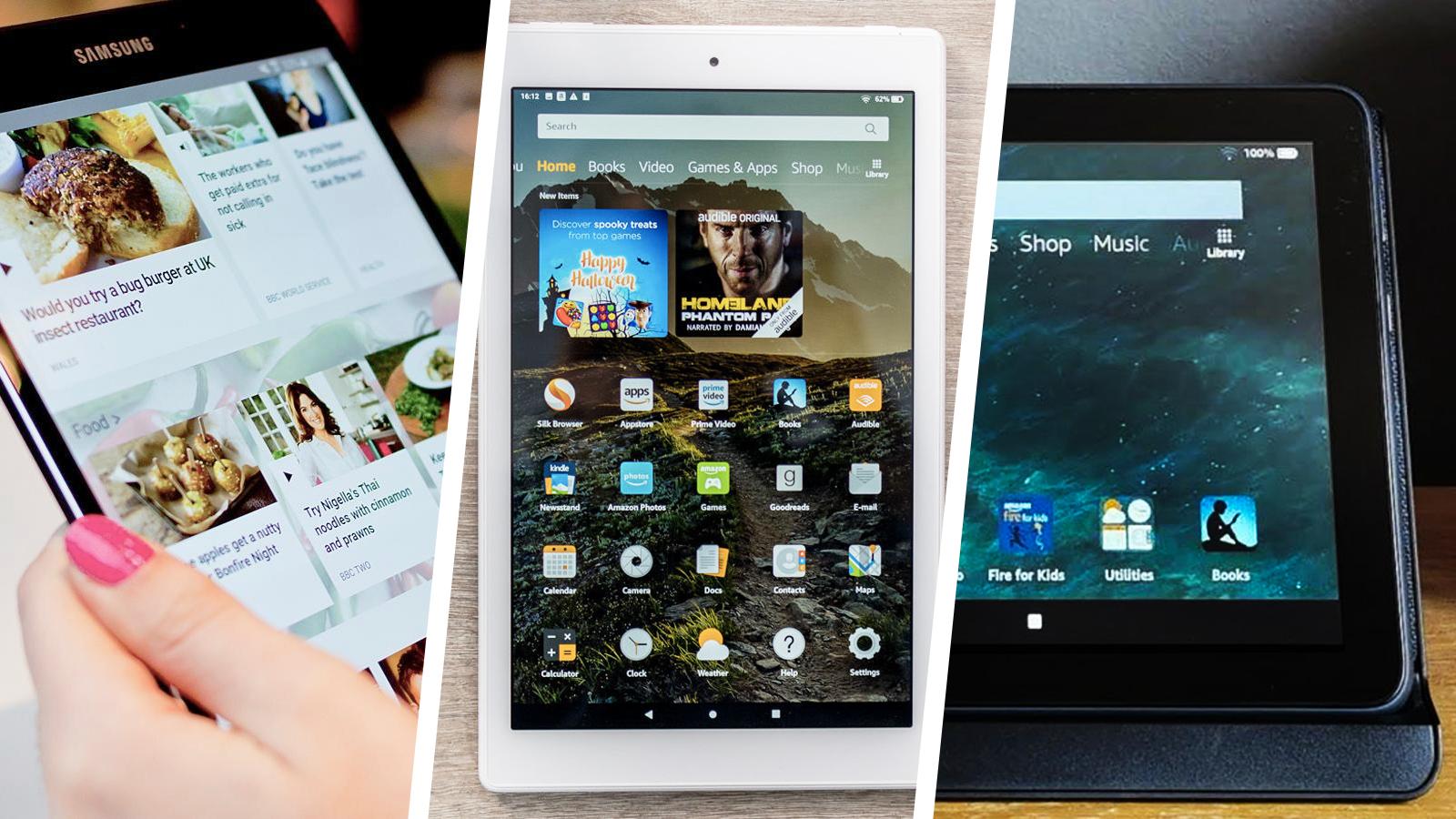 Amazon is the current king of cheap tablets. Its Fire and Fire HD slates cost between around $60/£60 and $150/£150 – sometimes even less, when offers are running – and their appeal doesn’t stop there.

Improved displays across the range, Alexa voice assistant support, microSD expandability and an easy-to-use operating system in Fire OS all help each and every Fire tablet serve as an instant recommendation.

It would be easy to say you’re a fool for buying anything different, but the Fire range has a few sticking points: they’re not standard Android tablets and don’t support Google apps natively. That’s where brands like Samsung and Nokia come in. They also serve up ads, unless you pay more for an ad-free version.

More generally, you really need to be careful buying cheap, generic tablets with names you’ve never heard of. These can suffer from poor screens, lacklustre performance and underwhelming battery life; always look at reviews before you buy, and if you can’t find any then we’d avoid the purchase altogether.

If you want a cheap tablet, you’ll be looking mainly at Amazon’s Fire tablet range, though there are some pretty decent Apple and Android tablets with better performance and more functionality if you want to spend a little more. Every tablet mentioned here costs less than $350/£350, though many are around the $100-150/£100-150 mark.

If you’re looking for a cheap tablet for a child, then check out our dedicated best kids tablets chart.

More expensive than other budget tablets

Though it’s comfortably more expensive than other entries in our budget chart, the 9th-gen iPad remains the best choice for those looking for a capable entry-level tablet that doesn’t cost the earth.

The iPad experience is a premium one no matter the model you opt for, with iPadOS 16 offering a suite of tablet-focused features and functionality that make it easy to use, even if you’ve never used an iPad before. It also has the widest and most high-quality selection of tablet-optimised apps of any tablet in our budget chart, with everything from Microsoft Office to pro-level drawing apps like Procreate and 4K video editing apps like iMovie.

It doesn’t boast Apple’s latest chipset, but the A13 Bionic (used in the iPhone 11) is still a capable chip that can comfortably run most apps, though you might not be able to run the absolute highest graphical settings on some games. The display is big and bright at 10.2in, and boasts Apple’s TrueTone tech that automiatlcally adjusts colour balance based on your environment.

There’s also support for the first-gen Apple Pencil, providing a high-end stylus experience from an entry-level tablet, ideal for everything from note taking to art.

So, yes, while the iPad is a more premium entry-level tablet than those from Amazon and Android manufacturers, it boasts the best all-round experience of them all.

The Galaxy A8 represents Samsung’s return to the budget market following 2019’s Tab A 10.1, though it doesn’t quite look like it on the surface. It sports Samsung’s signature premium design and build alongside other standout qualities like loud, booming audio via Dolby Atmos-powered quad speakers and decent battery life.

Of course, something’s gotta give at the budget end and with the A8, that’s both the screen and internal storage. The display is a rather basic 8in TFT LCD panel that, while sufficiently sharp, isn’t particularly vibrant or colour-accurate. The entry-level 32GB of internal storage will likely leave some wanting more – and without a microSD slot, that simply isn’t possible. You can opt for a 64- or 128GB model at checkout though, something we’d recommend for longevity.

Still, it’s a great all-rounder that can already be found well below RRP.

If you’re on the market for an Android experience that’s close to stock, the Nokia T20 is the best option right now. It comes running Android 11 out of the box, with no bloatware of UI changes to get used to. It’s also more capable than Amazon’s Fire OS, with full access to the library of apps and games available on Google Play.

Software aside, the premium build quality, impressive 2K display and decent battery life make the T20 a capable budget tablet – though don’t quite expect the same level of performance as Samsung’s A8, with the T20 trailing just behind in benchmarks.

Still, it’s a great alternative to the sea of (relatively unknown) manufacturers that currently tailor to the budget Android tablet space.

While the Amazon Fire HD 8 has traditionally represented good value for money, that’s beginning to slip – especially if you opt for the ad-free model, or one with more storage. There’s a $10/£10 increase despite no real improvements bar the introduction of USB-C for charging, and if you want an ad-free experience, that’ll cost you an additional $10/£10.

That said, it does everything you’d expect from a Fire HD tablet, including an Amazon Echo Show mode that’ll let you use Alexa with your voice, stereo speaker support, a built-in microSD card slot and wireless charging. You’ve got access to a range of apps and games via Amazon’s Appstore, though you won’t be able to download apps from Google Play or use any Google services despite FireOS being based on Android 11.

This is a limitation that some will be happy to accept at such a cheap price point, and it does offer great value for money for those that simply need a tablet for light browsing and everyday tasks, but with price rises and increasing budget competition from Android tablets, the Fire HD 8 isn’t as tempting as it once was.

Amazon refreshed its 10in Fire tablet once again for 2021, and while, as ever, there’s a model that’s tailor-made for kids, there’s also a bundle that places a focus on productivity; which includes a Bluetooth keyboard and year’s subscription to Microsoft Office 365.

Even without the extras, the HD 10 is still a great budget entertainment slate, also boasting better performance and better cameras to boot. It also features always-on Alexa support, so you can fire off queries, even when the HD 10’s display is off.

You have the option of a Plus model with wireless charging and it does better than expected as a productivity machine, but in every case, the tablet’s low price tag versus more conventional Android-based competition comes with the caveat that FireOS doesn’t support Google Play Store apps natively, so you won’t necessarily find all the experiences you’re looking for with this slate (i.e. check before you buy).

The Amazon Fire 7 is the smallest in Amazon’s current tablet line-up, making it the most portable of the Fire tablets we’ve listed here – and most other brands too. It’s also among the cheapest, but with that comes caveats.

The biggest caveat is performance, with a noticeable wait for apps to open – especially basic games. It should be fine for watching movies and light browsing, but don’t expect performance to match that of more premium tablets. The display’s sub-720p resolution isn’t great for detail, and the cameras are poor, but that’s a trend among Amazon tablets in general.

Essentially, it’s a handy portable tablet if you’re on a really strict budget, but if you can afford a little more, there are plenty of great alternatives in our chart.

No Alexa in kids profiles

Both a big tablet for kids and a tablet ideal for bigger kids, this is the first time Amazon has taken one of its child-centric slates ‘Pro’.

The HD 10 Kids Pro runs on the same underlying hardware as its general-purpose alter ego but comes with a protective case, one year’s access to Kids+ (which includes entertainment, apps, books etc.) and a two-year warranty that includes a no-questions-asked replacement if your little ones manage to decommission the slate the first time around.

The included case is a little more grown-up looking than the conventional Kids bumper, as is the UI that shows up on-screen. The user experience is closer to that of stock FireOS but makes for easy activity monitoring and leaves out access to certain age-gated content or apps (like Netflix), which have to be approved by a parent before being installed.

It’s a shame the kid-friendly version of Alexa isn’t supported – even though the tablet itself does facilitate such functionality – and certain kid-suitable Prime movies just don’t make an appearance without reason.

A great Galaxy Tab offering for those on a budget, 2019’s Tab A 10.1 boasts a surprisingly premium design, a nice screen and impressive battery life at a competitive price point.

It lacks raw power when it comes to gaming and the hardware is getting on a bit compared to 2022 alternatives, but affordable Google Play-capable slates are still hard to come by; meaning this is still a viable buy if you can get it with a discount.

Budget tablet buying guide 1.
What screen size do I need?

First, decide on screen size. Do you want a portable tablet with a 7in screen, or do you want something larger? We can’t tell you what’s best for you, but in general, a 7in or 8in screen is best if you’re likely to take the tablet around with you (you can also get smaller sizes), while a 9in to 10in screen is good if you only need to travel with it occasionally or it’s destined to live at home.

Look for an IPS screen (or better yet, an OLED screen), as this technology is almost guaranteed to offer superior colours and viewing angles versus a basic TN display. It doesn’t say too much about brightness and contrast, but almost all the IPS screens we’ve seen should be good enough for most users’ needs.

Resolution isn’t as important as you might think. Pixel density is a better guide: you need fewer pixels on a smaller screen and vice versa. Look for at least 220 pixels per inch (often abbreviated to ‘dpi’) to keep things looking crisp.

2.
How much storage do I need?

You won’t get much storage in a budget tablet but that’s fine if your chosen model has a microSD slot for expandability. Amazon’s old tablets don’t, which is one big black mark against them. However, the newer entries do, which is why we rate them so highly.

Consider 16GB a minimum for internal space, though 32GB or higher is ideal. Whether that’s down to expanding storage via a microSD card slot will depend on the tablet you opt for.

Most tablet cameras (let alone budget models) are relatively poor, compared to your average smartphone. Don’t expect great quality photos or videos from any budget slate, but if this is important to you, always check reviews to see which tablet has the least-worst cameras.

4.
Which processor is best?

While higher numbers are usually better, don’t pay GHz numbers or even RAM too much mind. It’s easy to be fooled into believing a tablet will (or won’t) perform well, based on numbers alone. Read our reviews to find out how each tablet handles in the real world.

5.
What tablet software is best?

If you do decide that a Fire tablet isn’t for you, the most like-minded alternative is an Android tablet.

Android is a great operating system, but it doesn’t follow that all cheap Android tablets are great. There are plenty of no-name brands out there, but as with most tech, you can’t buy one based on specifications alone.

The operating system determines not just which apps are pre-installed, but also which you can download and use. The Google Play store has a massive selection and it’s rare to find an app that’s only on iPad and not available to Android users, but it does happen – especially on the tablet front.

iPadOS is arguably the most capable and easy-to-use of all the tablet operating systems, though you’ll be paying a premium for Apple’s hardware.

If you’re unsure whether a tablet is the right device, read our
laptop vs tablet buyer’s guide and take a look at our
best tablet stands roundup.