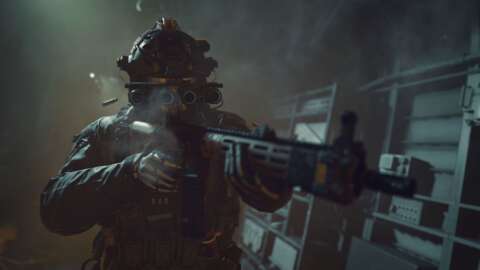 Call of Duty: Modern Warfare 2’s Spec Ops co-op missions have tons of intel to collect, and here we’ll guide you to each intel location to collect all 20 pieces from the Low Profile mission. These pieces of intel are scattered around the map in the form of items such as USB sticks, audio logs, and crates. Additionally, it’s worth noting that finding 20 intel items in Spec Ops will reward you with the Full SSE Trophy/Achievement. There are 50 intel pieces throughout all three Spec Ops missions, but this is the easiest route to get the 20 needed for the Trophy/Achievement.

These intel pieces can be collected by using stealth to move around the map, or you can go in guns blazing and just clear out every location as you work your way around the area. There’s no time limit for completing the mission, so use what method you prefer.

The intel can be collected in any order, but starting at B and working around the map clearing out enemies with stealth is a great approach to avoid getting overwhelmed. You can scroll down to the last intel location on the list and choose if you want to start there to make that intel an easier grab, or if you want to nab it after clearing out all the enemies. It’s a bit tricky, so I saved it for last.

Intel #1B Target building for first two pieces of intel

The first Intel location is near the B Target Site, which is the marked objective on the map. You’ll find a USB Stick Intel fragment on a table inside a building with three arches.

Now you’ll want to head to the roof of the same building as the first piece of intel, where you’ll find the second piece is a crate on the rooftop.

The third Intel location is another crate, which is found on a rooftop of a building just north of the previous one. You can easily access the roof by climbing up an exterior ladder on the side of the building.

Intel #4Crate intel inside white truck on the west side bridge

Now you’ll want to make your way over the bridge located near the west side of the map. This is the one closest to the objective’s Target C Site. In the middle of the bridge, you’ll find a white truck with the fourth intel drop inside. This is another crate. Beware of the Juggernaut enemy lurking nearby with a minigun. If your stealth is successful and none of the nearby soldiers get alerted, you might be able to grab this piece without triggering the Juggernaut to pursue you.

Intel #5Yellow ping marks the building for intel 5, 6, and 7

Moving just past the bridge, you’ll want to access the second building on the left. This is an odd, jagged-shaped building layout with a large antenna on the roof. The intel is a USB stick found on the first floor. It’s on top of a table with a computer.

You don’t have to go far for the sixth intel piece, as it’s another USB stick inside the same building and floor as the fifth location. Move towards the set of stairs that leads up to the second floor, and you’ll find the USB plugged into a laptop on a table with two radios.

Staying in the same building, head up to the second floor to find the seventh intel, which is an audio log located on top of a desk with several documents.

The ninth piece is found on the second floor of the same building as the eighth. Once on the second level, look for a room that has a laptop. The intel is a USB stick plugged into the laptop.

Staying in the same spot as you found the last piece, go to the neighboring room to find the tenth piece as an audio log on a bedside table.

In order to collect this eleventh piece, you’ll first need to obtain the Desk Key from the same room as the tenth piece. This key is located on top of a table. Grab the Desk Key and return to the previous building. There’s a locked desk drawer on the first floor. Unlock it to collect and collect the folder intel piece.

Intel #12Entrance to dive down for intel 12

The twelfth piece is a bit sneaky, because it’s actually located underwater by the island. This is found by heading to the smaller bridge located on the middle of the map. From the small bridge, you’ll need to jump into the water and swim west until you find a large square opening located between some rocks. There is a crate intel piece in the water here. You shouldn’t have to dive for long to find it.

Intel #13Underwater cave on island to dive down for intel 13

Intel thirteen is also found underwater, but you’ll need to go further out from the last piece to the small island nearby. You’ll find a small underwater cave on the island, which is near the right side of a large building. The crate intel is found underwater inside the cave. This can easily be spotted if you’re familiar with Modern Warfare 2’s Hydroelectric multiplayer map. It’s the pool of water near the B Domination point. You should see the crate just by looking down into the water here.

Intel #14Intel 14 on the rooftop directly north of the island

Next, head north from the island to find the fourteenth piece. You’ll find the crate intel on the roof of a building directly north of the small island.

Now, you want to head towards the A Target Site to find the building directly next to the bridge from B to A. The fifteenth piece is a crate found on the roof of the building on the left side of the street.

These next three intel pieces are all found inside the A Target building, which requires you to first disable all the traps before you can collect the intel. Tripping any of the traps will instantly down you, so move through the building with caution and disable each trap.

The sixteenth piece is a USB stick on the first floor of the A building. This USB is found on a table in a room with empty weapon cases and lots of scattered bullets.

The seventeenth is an audio log located in the room next to where you find the sixteenth piece. The intel is found on a box next to a window and some lockers.

You’ll find the eighteenth piece requires you to move up to the second floor of A building. This is an audio log sitting on a breakroom table near some vending machines.

The nineteenth piece is located outside against a wall near the most northern buildings on the map. This is a crate on the ground. It’s not too hard to spot, but if you’re struggling with visibility on the night map, make sure to use your night vision goggles here.

Intel #20When standing on top of the radio tower at Target A, you’re aiming for the tower on the island

The final intel isn’t easy to access. First, you’ll want to climb to the top of the tall radio tower located near the A Target Site. From the top of the tower, parachute towards the tower found on the small island. The intel is a crate on the rooftop.

Additionally, you can try to attempt this when first dropping in to the mission by parachuting down to this rooftop first. Otherwise, you’ll need to get to high ground to reach this roof. I saved this for last.

If you’re wanting to make the most out of the campaign, make sure to check out our guide for all locations and unlock codes for Modern Warfare 2’s safes. We also provide some recommended Modern Warfare 2 settings to use across campaign, MP, and Spec Ops.