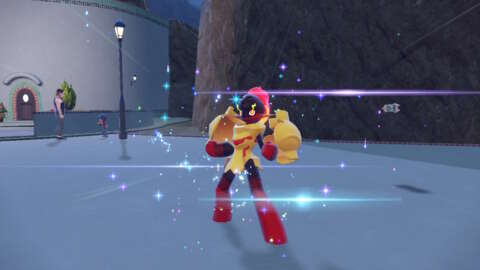 Pokemon Violet and Scarlet are full of new Pokemon in the Paldea region for players to discover and catch. One of those new Pokemon is Charcadet, a small red knight-like Pokemon that can be quite powerful. Charcadet can evolve into either Armarouge, a Fire/Psychic Pokemon, in Scarlet or into Creuledge, a Fire/Ghost Pokemon, in Violet. Regardless of which version you are playing, you will need to obtain a special item in order to evolve Charcadet.

Where to find CharcadetCharcadet can be found in most of Paldea, although it is considered uncommon.

As for finding a Charcadet, the Pokedex entry lists its habitat as most of the southern half of Paldea. Personally, I found them easiest to find in South Providence Area Three, which is located directly to the East of Mesagoza. They can be difficult to spot due to their small stature, but the bright-red color makes them a bit easier to spot. You can also consume some food that boosts catching fire-type Pokemon to assist with this endeavor.

Evolving CharcadetYou will need to find a man in a plaid shirt in Zapapico.

Both of these Pokemon can be found early on in the game, although in very limited areas. These crafting items, typically used to make TMs, drop whenever you defeat one in battle in the wild, so track down a group and use the autobattle feature to take them down quickly. Once you have acquired 10 of the needed items, go trade the man for the armor. The armor works like other evolutionary items, but it is consumed once used. There is no level requirement for evolving Charcadet.

If you are looking to get the other version’s evolution of Charcadet, there are a few methods for doing so. You can trade a friend for the evolved version of Charcadet from whatever version of the game you don’t have. You can also have a friend give the armor set to a random Pokemon to hold and trade for that Pokemon. You cannot join a co-op session with a friend playing the other version, as the NPC will still offer you the same evolution item as your version of the game.