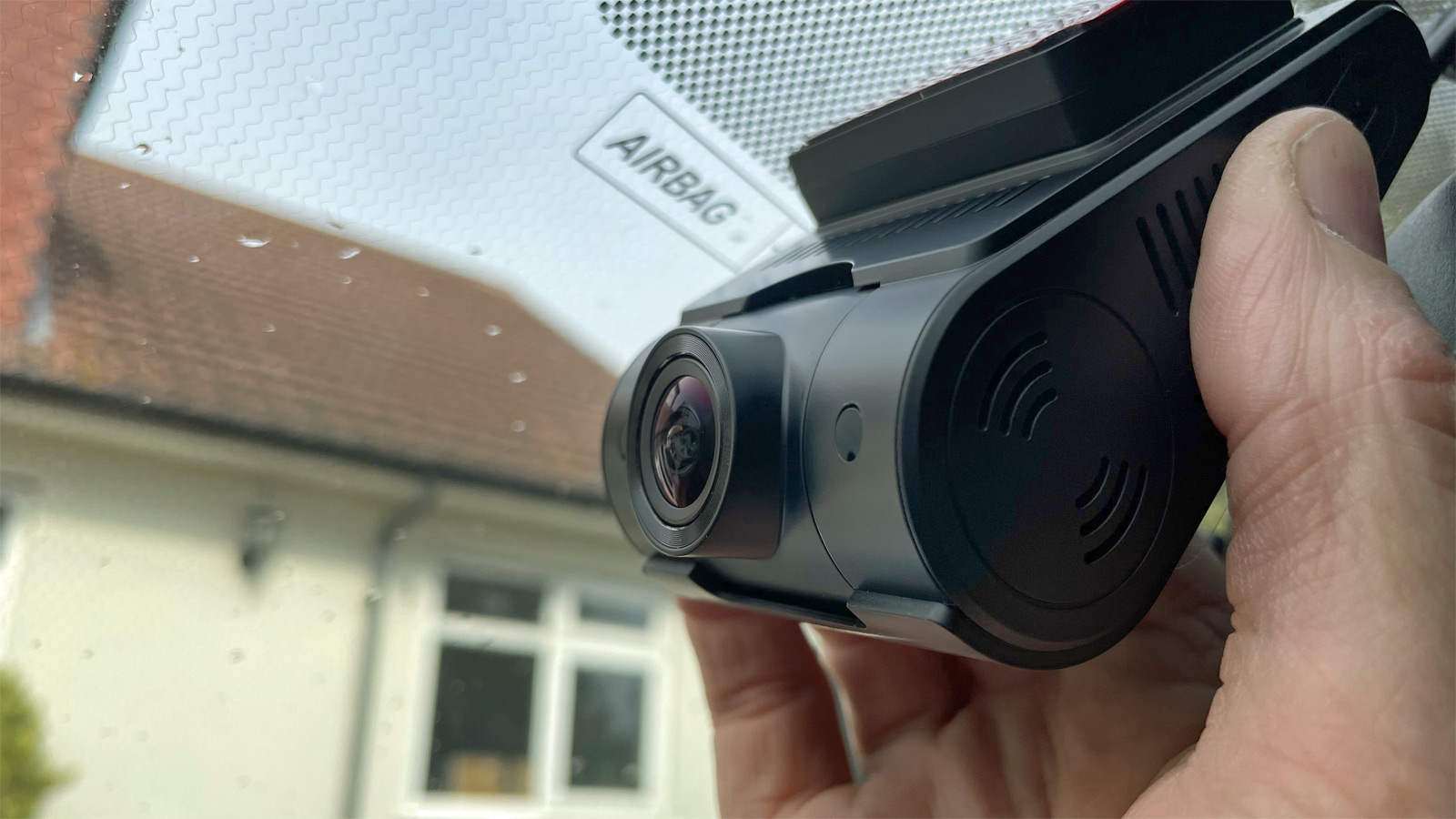 If you don’t already have one in your car, a dash cam is the single best gadget you can buy. That’s because it will provide video evidence – an unbiased witness – that can help to prove what happened if you or someone else is involved in a collision, or some other bad driving.

There are lots of affordable options, and it’s a good idea to choose one which includes a rear camera as well as a front-facing one to cover the action that happens behind you.

Installing a dash cam isn’t complicated because they’re designed to be universal and fit any car. Even if you want to hard-wire it (which means connecting it permanently to your car’s electrical system rather than plugging it into a 12V accessory socket) it can still be a DIY job, and all this wiring is fully reversible if you ever need to remove it from the car: there’s no cutting or soldering.

Here, then is everything you need to know. I’m using a Viofo A229 Duo as an example here, which includes front + rear cameras, but the basic process is the same for all dash cams.

For most people, the simplest way to power a dash cam is using the accessory power socket – which you may know at the cigarette lighter socket. It’s usually in the centre console or near to the heater / air conditioning controls.

In most cars, there is power to this socket only when the ignition is on, which means it won’t record anything while the car is parked. A small minority of dash cams have built-in batteries to record while parked, but most require hard wiring to enable the use of parking mode.

2. Plan the location and wiring route

Before you do anything, plan where you will mount the dash cam. It shouldn’t obscure the driver’s view (which may be illegal in some states or countries) and is usually best placed behind the rear-view mirror on the passenger side of the vehicle.

From that location, plan where the power cable will go in order to reach the 12V socket. Typically, this will be along the top of the windscreen, around the edge of the door, down past the dashboard, across beneath the glovebox and to the power socket.

If you are going to hard-wire your dash cam, be sure to purchase the optional hard-wire kit, and find out where your car’s interior fuse box is located: this information can be found in the car’s user guide.

Sometimes there’s a choice of suction or adhesive mounts. Always choose the adhesive mount, as this won’t fall off like suction cups sometimes do.

Before actually sticking the mount to the windscreen, check that the lens won’t be obscured by anything, including any shading or sunstrip on the windscreen.

Also make sure that there’s space to plug in the power wire (and rear camera wire, if installing a dual-camera model). Do this by first connecting the wires to the dash cam, then offering it up in your chosen location.

If all is ok, remove the backing paper and press the mount firmly into position.

Following your plan from earlier, route the power cable starting from the dash cam and ending up at the power socket.

Some dash cams are supplied with adhesive cable clips to stick to the windscreen or trim, but it’s far neater to tuck the cable above the headliner, and behind the plastic trim down the side of the windscreen. You can either push it in or, if that’s not working, use a plastic trim tool to carefully prise open a gap big enough to push the cable into.

TIP: Instead of running the cable down the ‘A’ pillar to the bottom of the windscreen, route it to the rubber gasket that runs around the door, then down towards the dashboard: preferably low enough so it can then go under the glove box.

You may want to use a zip tie or two to hold the cable in place so it doesn’t dangle into the footwell.

It can be difficult to hide the wire completely from this point on to the power socket: it will depend entirely upon the design of your car’s dashboard and the location of the socket.

If you’ve opted for a dash cam with front and rear cameras, now’s the time to fit the rear one. The process is exactly the same as for the front camera.

Again, choose a location where it won’t obscure the driver’s view out of the rear window, but also remember that if you place the camera outside of the sweep of the rear windscreen wiper, the view could be very poor – especially in winter.

If your car is a hatchback, you may have to leave a loop of wire so there’s enough to reach the camera when the tailgate is raised, as shown here.

It can be worth temporarily connecting the rear camera to the front one, turning on the ignition and holding it in position while it records a few seconds of video (or using the live view in a companion app) so you can be sure the view is good before mounting it.

Ideally, you want to avoid one of the heated rear windscreen wires running across the centre of the image, and mount the camera so the lens peers between two of the wires.

Insert a microSD card into the dash cam. You may have to supply your own – if so here are some recommendations.

Now turn on the ignition and the screen on the dash cam should come on, or LEDs light if there’s no screen. There’s usually a start-up sound as well, to tell you the dash cam is recording without looking at it.

If your dash cam has built-in GPS, there’s no need to set the time or date: this will be done automatically. If not, you’ll need to set this so that any video evidence will show the correct time and date. And if you live in a country with daylight saving, remember to change the clock every six months so it’s still correct.

Other settings to check include how long each video clip lasts: one minute is sensible.

If the dash cam has Wi-Fi and a companion app, as the Viofo A229 Duo does, it’s easier to change those settings in the app.

You might also want to choose which information is stamped onto the video (or not) such as time, date, car registration, speed and location. The latter two will be available only if the dash cam has GPS.

You may decide that you want to pay a professional to install a hard-wire kit, but it really isn’t too difficult.

When you buy a hard-wire kit, chances are it will have two or three bare wires: red, black and potentially yellow, like Viofo’s HK4 kit here.

It will have some sort of box, which is for converting the 12V supplied from the car to the 5V that dash cams require. There may also be a sliding switch which allows you to set the minimum voltage the battery can reach before the dash cam will turn off. This prevents the battery being completely drained when you leave the car parked for a long period of time.

In order to connect these wires to your car’s fuse box you will need to buy so-called ‘piggyback fuse holders’.

There are three different sizes, so check which type your car uses before ordering. The holders have a short piece of wire designed to be crimped onto the wire from the hard-wire kit. If you don’t have a crimping tool, you can use some long-nose pliers or even a pair of blunt scissors.

This might be the alarm system, interior lights or something that obviously needs to work when the car is parked up.

(You can use a multimeter, if you have one, and touch the probes to the two terminals of each fuse to see which ones read 12V when the ignition is off.)

For the yellow wire, if present, this needs to be connected to a fuse which has power only when the ignition is on. This could be the radio, 12V accessory socket or something else. Again, using a multimeter will confirm which fuses are not live when the ignition is switched off.

This wire is necessary as it tells the dash cam when to switch into parking mode.

Once you’ve identified the fuses to use, locate them in the fuse box and remove them using a fuse removal tool – typically found clipped into the lid of the main fuse box in the engine bay.

Now, push your piggyback fuse holders in where the fuses were and push the fuses into the slot that’s closest to the prongs which plug into the fusebox.

In the other slot (the one furthest away from the prongs) may be a pre-installed fuse, depending upon the cables you’re purchased. If there isn’t one you’ll need to install one on each piggyback cable with a relatively low rating suitable for a dash cam, such as 5A.

The black wire usually has a spade connector on the end, and is designed to be clamped beneath a nut that’s connected to the car’s body to give an earth connection. There’s usually a suitable one in the passenger footwell, although you may have to pull back the carpet a bit if you don’t find one.

You’ll need a spanner or socket to loosen the nut enough to slot the spade underneath it, then tighten it again.

You can install a hard-wire kit even if your dash cam doesn’t have a parking mode, but if you do that, be sure to pick a fuse for the red wire which does not have power when the ignition is switched off, otherwise it will continue recording until the car’s battery is drained.