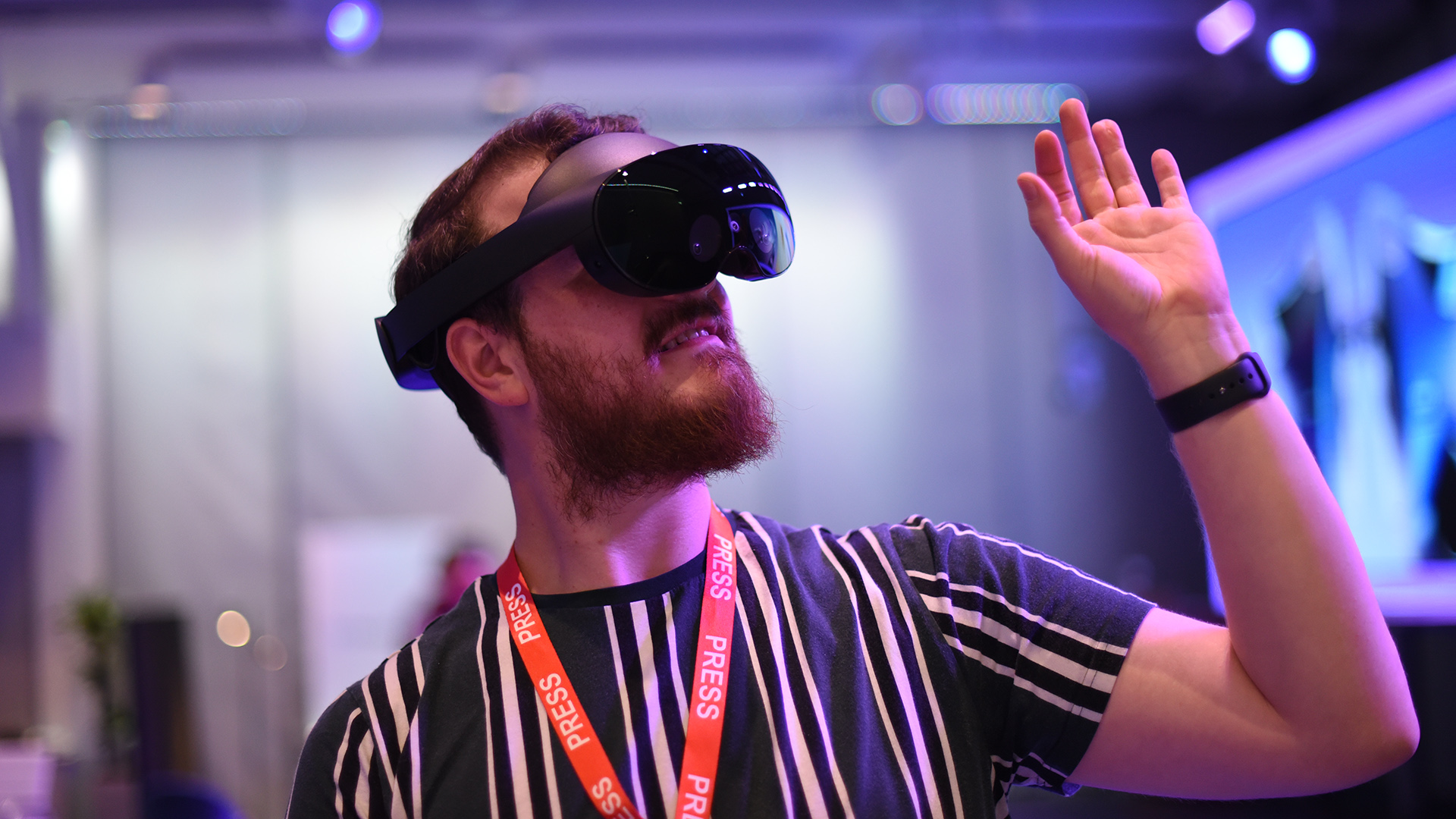 Meta just announced the Meta Quest Pro at its annual Connect event, and it’s a big departure from the regular Quest 2 in more ways than one. You’ve got all the standard upgrades, like boosted performance, enhanced controllers and improved optics, but its focus is arguably more on mixed reality (MR) than purely virtual reality (VR).

We’ve seen this with early MR apps available on the Meta Quest 2, using the low-res black and white passthrough cameras on the system to merge the virtual and physical worlds, but the Meta Quest Pro takes it to a new level.

That’s most evident from the design of the headset itself. As well as sporting a much thinner HMD (head-mounted display) than the Quest 2 thanks to new pancake optics, you’ll notice that the headset sports an open periphery design. In layman’s terms, that means you can see the real world in your periphery, lacking the light blockers of a traditional closed VR headset.

Being able to see the real world in your periphery when using MR apps feels more comfortable and natural, especially when combined with Meta’s new passthrough cameras. The upgraded cameras not only bring colour to mixed reality, but with 4x as many pixels as the Quest 2 cameras, it’s a pretty high-res experience too, further helping blur the lines between the real and virtual worlds.

I went along to a preview event for the Meta Quest Pro ahead of its reveal, and I can attest that it does feel much more comfortable to have the real world in your periphery when using MR apps – of which there were plenty for me to demo. It meant I could keep track of what was going on around me, ideal for use in work scenarios as Meta envisions, and I felt more confident walking around the space than with a traditional VR headset on passthrough mode.

However, it’s interesting to note that while I got to try my hand at six MR demos during the event, there wasn’t a single demo tailored to VR, further signposting Meta’s intentions for the headset.

I have to admit, the mixed reality experience on offer from Meta’s new headset is an impressive one, bringing the augmented future closer into view than ever before. Being able to paint on a virtual canvas and put various brushes on a real-world table next to me is fascinating, and the idea of hanging my virtual artwork on my real-world wall is pretty cool too.

It’s not quite the slimline AR glasses of tomorrow, but it’s a good taster of the kinds of experiences we should expect.

But what about those of us who want to play a game of Beat Saber on our shiny new headset? Meta has confirmed that all Quest 2 content is usable on the Quest Pro, after all. Meta’s solution is a pair of side light blockers that magnetically snap into place when you want to feel more immersed, and the good news is that they’re included in the box.

It still doesn’t bring it close to the closed VR experience of the Quest 2, with light still visible from below the headset, but Meta says there will be a $49.99/£49.99 full light blocker designed for complete darkness – it’s just a shame that isn’t included with the headset. The fact that it isn’t further suggests that Meta’s focus is indeed on the mixed reality experience, and that those looking for a traditional VR experience should stick with the entry-level Meta Quest 2.

The real question is, are consumers (and developers) ready for the jump to mixed reality, or should Meta have first perfected the virtual world before trying to blend the two? Only time will tell.

The Meta Quest Pro is available to pre-order right now for a cool $1499/£1499 from the Meta website, along with retailers including Amazon in the US and Amazon and Currys in the UK, with release set for 25 October. We cover where to buy the Meta Quest Pro in more detail separately if you’re interested.

To learn more about Meta’s first high-end headset, take a look at all you need to know about the Meta Quest Pro. We’ve also got the first unofficial details of the Meta Quest 3 for those looking forward to the next-gen headset.