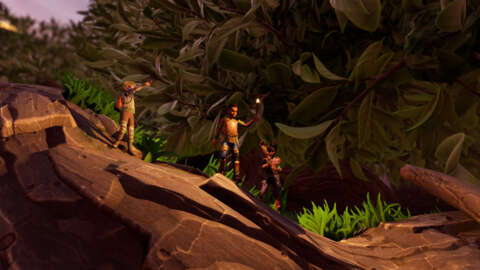 Playing online games with friends can be a frustrating experience. If the game is hosted on a server, you have to depend on that server being up and stable. If the game is hosted peer-to-peer, the host might have to be actively playing the game, or have a machine in their home they can use to host a server. Obsidian’s Grounded, however, has found a genius way around all of this–and it’s something other developers should look to replicate where possible.

WARNING: There is a close-up picture of one of the insects from Grounded, but we’ve left out any pictures of spiders.

Grounded recently hit 1.0 after spending a good amount of time in early access, and what Obsidian gave us is one of its most polished games ever. The core conceit is simple: Take the movie Honey I Shrunk the Kids and make it a survival game. You drop as one of four kids into a world where the grass is as big as trees, and the trees as big as skyscrapers. This game can be played with up to four players, and it’s meant to be a persistent world that anyone can log into at any time. Grounded is on Game Pass, so there’s no extra buy-in to get started, and no servers for the developer or publisher to eventually shut down since it’s peer-to-peer.

When you start a new save, you have the option to make the save a single-player or multiplayer map; you can change this later. Once someone you’ve invited joins the server, they can either join when you’re hosting or host for themselves.

Instead of hosting it on a server, Grounded is hosted by the first player to boot up the world as a peer-to-peer connection. Once those players have access to the world, though, they and anyone else who has played in that world will have access to a synced save that any of them can use and sync to and from. Every time you log in, you get a persistent world that has your progression and building that you’ve done, and you can play regardless of whether the game originator is available or not. You can host on your PC or Xbox, or join another friend who’s hosting, and everything is there.

In other words, it’s all the convenience of a server-hosted game, with none of the cost.

Compare this to Satisfactory, an excellent game about building conveyor belts on alien planets for the good of all capitalism. Satisfactory is, like Grounded, hosted peer-to-peer. However, it still requires someone hosting an active server to play, and saves are not synced like this–in other words, when your friend goes on vacation for a week, you’re out of luck until they get back. The other option is to build or rent a dedicated server, which can be pretty costly, with many options costing $12 or $15 per month. If you decide to host the server yourself, you have to learn all of the commands to manipulate it and make sure to keep it active all the time.

This method wouldn’t work for every shared multiplayer world–despite its simple appearance, a game like Minecraft can quickly balloon to take up multiple gigabytes of space. On a populated server, that means your connection is always going to be in use by some user or another, and they’ll be transmitting lots of data–not ideal in this era of bandwidth caps. Hosting on a shared save doesn’t make sense. But for many other multiplayer games like this, it’s a great option. It takes advantage of the cloud saves that most major gaming platforms now offer, it saves power by not running a game that no one is playing, and it equalizes access by ensuring that no one person has more ownership of the game than anyone else. And since users have to be specifically invited, only your friends can sabotage your save. So it’s really just on you to make sure you have trustworthy friends.

While multiplayer games themselves and their servers come and go, the more generalized servers like those hosted by Microsoft, Valve, and the like aren’t going anywhere anytime soon. With no servers to keep alive, Grounded isn’t dependent on Obsidian or Microsoft needing to maintain game-specific servers, and players don’t have to worry about some hosting company offering an option for a specific game. And in a world where electricity is becoming increasingly expensive in terms of both monetary and environmental costs, not having to run a server all the time is going to be increasingly important in the coming years. With the popularity of shared-world multiplayer games, Obsidian is showing some major forward thinking in futureproofing its new game to make sure that people can access it for years to come.