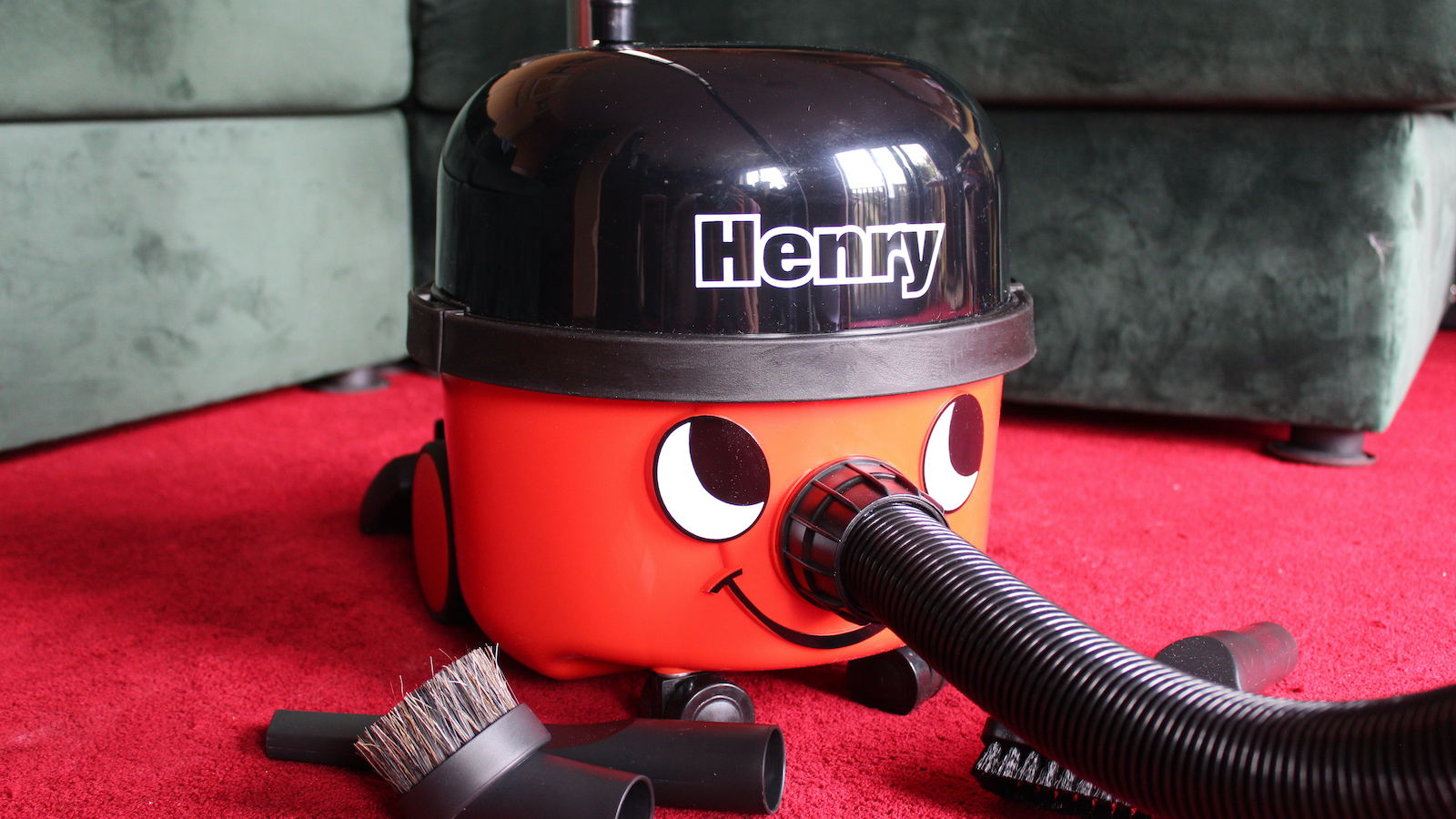 It’s not just the recognisable grin that’s made this vacuum a go-to for big and small messes alike. While Henry won’t be suitable for every home, and can be a chore to drag around, its reliability, solid build quality and excellent pick-up, even on carpet, make it a good choice for those who appreciate a really thorough clean.

Few vacuum cleaners come with a professional stamp of approval as well as instant recognisability. Behind the smiling face of Numatic’s UK-made Henry HVR160 is the reason why it’s so beloved: six litres of cleaning capacity, which is up to five times more than some bagless models, a long cable, so you can clean different rooms without having to unplug, and a 26.1m reach so there’s no struggle to clean corners, stairs or under furniture.

Add to this a self-seal tab on the bag inside, so you can empty it without scattering mess everywhere, and it soon becomes clear why there have been 14 million Henrys made already, with most still in use.

Recent years have seen sleek, stylish canister vacuums crowd the market, but Henry isn’t that. Instead, the HVR160 is a workhorse: made with reliability and capacity in mind rather than looks.

In this, its design serves it well: Henry feels robust, with a couple of clips that release so the top can be taken off to empty the bag or clean the filter inside; four swivelling castors so it’ll follow you wherever you go; and a solid plastic construction that seems ready for anything.

For those who are less keen on its anthropomorphic qualities, you can remove Henry’s face, though it feels like sacrilege to do so.

On top, there’s a manual winder that gathers the 10m long power cable after you’re finished cleaning and a handle for carrying Henry around.

To the rear, you’ll find two prongs for on-board tool storage: ours came with two brushes and nozzle, which could be combined so all the tools had a home.

At the other side is Henry’s flexible hose and stainless-steel tube set, which can be assembled and adjusted to suit the height of the user: great if you’re taller or shorter than average. There’s also a control on the tube to vary suction.

One thing to be aware of is that Henry can be heavy to drag around as it fills up, especially if you’re used to a cordless vac: the machine and kit weigh 7.5kg alone. Storage could also be an issue: while the hose clips neatly into the back, this can make it quite tall, even though the actual vacuum is only 32 x 34 x 34.5cm.

One area where Henry could do better is in the instructions: they’re largely pictorial, which makes it tricky to get to know the vacuum’s features in detail. For example, while there’s a switch on the brush head so it can clean both hard floors and carpets, it’s not clear which is which: it’s shown with the brush head switch in the same position for both (we used it with brushes down for hard floors and up for carpet).

There’s also no suggestion of what each tool is good for. Ultimately, it’s a case of learning which one works best for the job.

We tested Henry on both hard and soft floors, using flour as fine dust and oats as debris. Its performance was excellent on both our LVT and medium-pile carpet, with flour easily sucked up on the first pass. Oats were slightly more tricky: while they were picked up on the carpet, some dropped from the brush head when the machine was turned off, suggesting that they hadn’t made it to the canister from the hose.

Oats on the hard floor also presented a slight difficulty in that when the brushes were down, the debris tended to be swept around rather than being sucked up. Switching to the brushes up solved the issue. We also tested the flat brush tool on a fabric sofa. It picked up pet fur with ease, although it was harder to manoeuvre than a handheld vacuum.

If you’re in the UK, Henry HVR160 is available direct from its maker Numatic for £119.99, via the My Henry website. It comes in four colour options: the traditional red, but also blue, green and yellow. You can also buy it from Currys, among other retailers, but there’s not much difference in price.

Don’t forget to factor in the cost of replacement bags. These are widely available and cheap, costing around £10 for a pack of ten.

Henry is also available in the US. You can buy one from Wayfair for around $375, although its specs are slightly different. A pack of ten replacement bags costs $31.35 from Amazon.

Numatic’s Henry promises great performance, reliability and a robust build: and on these points it delivers faultlessly. We liked that there was no brush roll to get tangled and need cleaning, making it far lower maintenance than vacuums that feature one. There’s also a lot to be said for its deceptively simple construction: should something get stuck in a tube or accidentally sucked up, it can be retrieved in seconds.

And yet, it’s far from a basic machine: impressive suction power and a design that allows you to clean every inch of your home easily makes this hard-working vac worth considering, especially if your current cordless isn’t cleaning as well as it should.

Ultimately, whether the HVR160 is the right fit for your home comes down to if you have enough storage space for it, whether or not you’re happy to buy replacement bags, and if you don’t mind towing a machine behind you as you clean. If the answer to those questions is yes, it’s time to invite Henry to your home.

For more vacuum cleaner buying options, have a look at our round-up of the best vacuum cleaners we’ve tested. All the entries are supported by full-length reviews.