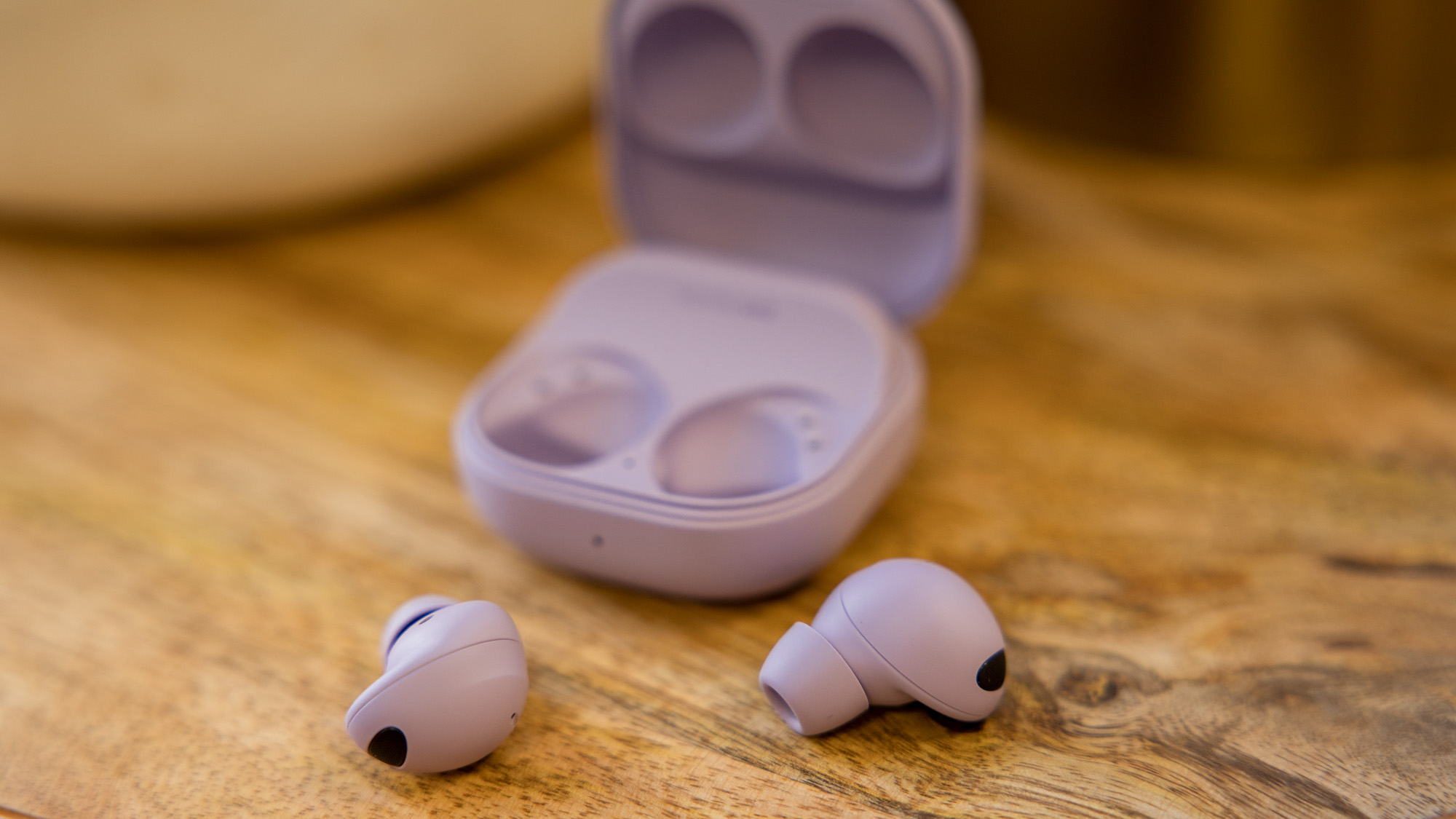 The Galaxy Buds 2 Pro look and sound great, with or without the new 24-bit audio support. They’re increasingly only for the faithful though, with limited iOS support, and 24-bit only available with a Samsung device. If you won’t take advantage of the additional audio quality, you’re better off elsewhere.

Samsung’s Galaxy Buds 2 are an excellent pair of relatively affordable true wireless buds, complete with active noise cancellation (ANC), wireless charging, and great sound. That left Samsung with a problem, though: what to do to make this year’s Pro upgrade stand out.

The Galaxy Buds 2 Pro answer that question with niche niceties like 24-bit and 360-degree audio – features that look good on the box, but aren’t likely to see much use from mainstream users.

The Buds 2 Pro still pack great audio quality and a comfortable fit – the latter in particular much improved from the first-gen Pros – but for most people the regular Buds 2 will make the better buy.

The Buds 2 Pro look comfortably of a piece with the rest of the Galaxy Buds range. Available in graphite, white, or purple, these are simple rounded earbuds with a matt plastic finish – a vast improvement on the glossy material Samsung has used on most of its other earbuds.

These are lightweight and compact, designed to nestle within your ear with a low profile. That makes them subtle when you’re out and about, and also saves from the risk of knocking an earbud out or catching it on a bag strap.

The downside of that compact design is that it’s near-impossible to adjust these without hitting the touch controls, which cover the whole outer edge of each bud. This has been the case for basically all of the Galaxy Buds so far, and Samsung is yet to find a fix, but the result is that any attempt to adjust the fit ends up pausing your music or skipping a track – and even just fiddling with your hair can do the same.

The good news is that unlike the previous Buds Pro, these do fit pretty comfortably. The Buds 2 Pro are lighter and a touch smaller than their predecessors, and between the three choices of silicon tip I was able to find a fit that works for me.

The free Galaxy Wearable app handily includes a ‘fit test’ too, which uses the buds’ microphones to check for sound leaks and let you know whether you’re wearing the buds right or not. Get the fit right first time, and the over-sensitive touch controls should be less of an issue.

One definite positive is that the Buds 2 Pro have an IPX7 rating, which signifies good water-resistance (but no protection from dust). That’s not the toughest around – the likes of the Jabra Elite 7 Pro protect from dust too, with IP57 – but it’s still at the upper end for earbuds. Note that this is for the earbuds only though, and the carry case is not safe from splashes.

Speaking of the case, it’s in the familiar Samsung square shape. It’s slim, compact, and the magnetic hinge feels secure, so there’s not really much to complain about here.

Thanks to help from its in-house audio brand AKG, Samsung has never struggled when it comes to making sure the Galaxy Buds sound good, and the Buds 2 Pro are no exception.

Let’s start with the core audio experience before we get onto the bells and whistles. These are the best sounding Galaxy Buds yet, with a warm, balanced sonic profile that suits almost everything I’ve thrown at it.

There’s enough bass to drive house or hip hop like the new Beyoncé album, but without losing the clarity and openness needed at higher registers for poppier fare like Carly Rae Jepsen’s Beach House. Of course this doesn’t offer the sort of broad, expansive sound stage that over-ear cans deliver, but for buds you can’t do much better.

The flagship new feature this year is the introduction of support for 24-bit audio – a higher bitrate than the industry standard 16-bit. There are caveats though: for now at least this only works with a compatible Samsung Galaxy phone running One UI 4 or later, and you’ll also need a source of 24-bit audio – for streaming that means the likes of Tidal or Apple Music, but not Spotify.

Samsung’s 24-bit support is courtesy of its own proprietary Samsung Seamless Hi-Fi Codec (SSC), though AAC and SBC are supported alongside it – though there’s no aptX HD, LDAC, or LHDC support.

I went in sceptical, not expecting buds this size to be capable of capitalising on the extra resolution and detail anyway. Switching from my usual Spotify to high-res streaming service Qobuz, I have to admit I was surprised: there’s a marked difference in detail and depth, a level of clarity lacking from 16-bit sources.

It’s still subtle though, and I suspect most people won’t find enough of a difference here make the extra cost worthwhile. Audiophiles who already own a Samsung phone should see some benefit, but the audio improvement isn’t enough to justify most people grabbing new headphones, a new phone, and swapping their streaming service.

There are fewer hoops to jump through for the buds’ 360 audio, which creates a virtual surround sound stage, including support for Dolby Atmos content.

The default setting here sounds great, adding depth and a sense of space to tracks, though for music you’ll probably want to disable the optional head tracking feature, which cuts the music in and out of each ear as you move your head around – fine when you’re watching a movie, distracting when you’re just turning your head on the bus and your tunes keep moving about.

Of course, as with any high-end earbuds these days, the Buds 2 Pro include ANC too. This too is excellent, blocking out most exterior noise so long as you have the fit right.

Samsung calls this ‘Intelligent ANC’, but it’s the same thing that Sony calls ‘speak-to-chat’. That means that if the buds detect you talking – using a combo of microphones and sensors for jaw movements – they automatically switch to the transparent ambient mode, amplifying outside noise and turning down your music volume so that you can hold a conversation comfortably.

That handy feature somewhat makes up for the fact that Samsung’s implementation of in-ear detection is still odd. While most equivalent earbuds will pause music when you remove an earbud, these only pause once you take both out, and require a manual tap to resume playback once they’re back in. Some will no doubt prefer that of course, but I wish there was an option to pause playback when I take one bud out – still my instinct when I need to talk to someone.

Battery life is probably the big weak spot for the Buds 2 Pro. It’s not bad, but it’s certainly not great, and rival buds do much better.

Samsung promises five hours of listening time with the ANC active, but I found they lasted a little over four hours before packing it in. That’s nowhere near enough to last a full day or a long flight on a single charge, which will be limiting for some.

Of course, you get more life once you factor in the case, which together with the buds should deliver up to 18 hours of battery. That’s respectable, but some buds offer 40 hours or more, and I’d personally happily take a slightly larger charging case in exchange for better battery.

Charging is decent though, with both USB-C and wireless charging available.

The Buds 2 Pro pair with your phone over the latest Bluetooth 5.3 standard, which is part of what drives the improved audio features.

It’s also a doddle to get these connected, with near-instant pop-ups offering to pair the buds to a Samsung phone or Windows laptop, though other devices will be a bit more manual.

All Android users can install the Galaxy Wearable app, which lets you customise some controls, turn settings on and off, and handles firmware updates for the earbuds.

This is where you can turn 360 audio and head tracking on or off, tweak the EQ, set-up (or disable) Bixby, and more. You can even toggle on a setting to get reminders to stretch your neck if the buds detect bad posture, but I found this about as irritating as you’d expect.

One downside is that this app isn’t available on iOS, so Apple owners will miss out on a lot of the headphones’ functionality. You can still pair the Buds 2 Pro to an iPhone over Bluetooth and use them fine, you just can’t access their more advanced features. Of course, the same would be true in the other direction with the AirPods Pro, so it’s hard to fault Samsung too much here.

The Galaxy Buds 2 Pro are available to order from Samsung now, or you can grab them from Amazon and other retailers.

They’ll set you back $229/£219/€229, very slightly undercutting the AirPods Pro, but certainly in the same ballpark.

That’s expensive for true wireless buds though, especially with sets like the Nothing Ear (1) now available with ANC and wireless charging from just $99/£99/€99. Even the broadly similar Galaxy Buds 2, officially priced at $149/£139/€149, often drop below the hundred line these days.

Most would be perfectly happy with one of those cheaper pairs, and now more than ever the Buds 2 Pro should really only be a consideration for audiophiles keen to make the most of 24-bit sound on the go – though if that’s your aim, it’s not bad value at all.

Check out our ranking of the best true wireless earbuds for more options, or the best budget wireless buds if you’d rather spend less.

Setting aside the price, the Galaxy Buds 2 Pro are Samsung’s best earbuds yet. A comfortable design, compact size, and excellent audio make these a winner, and the middling battery life is the only real letdown.

With 24-bit audio limited to users of Samsung phones and compatible audio sources, the value proposition here may not make sense unless you’re already on the hook for those.

That’s especially true with Samsung’s competitively priced Galaxy Buds 2 out already – if you’re not fussed on high-res sound, the other upgrades probably aren’t enough to justify paying twice as much to go Pro.