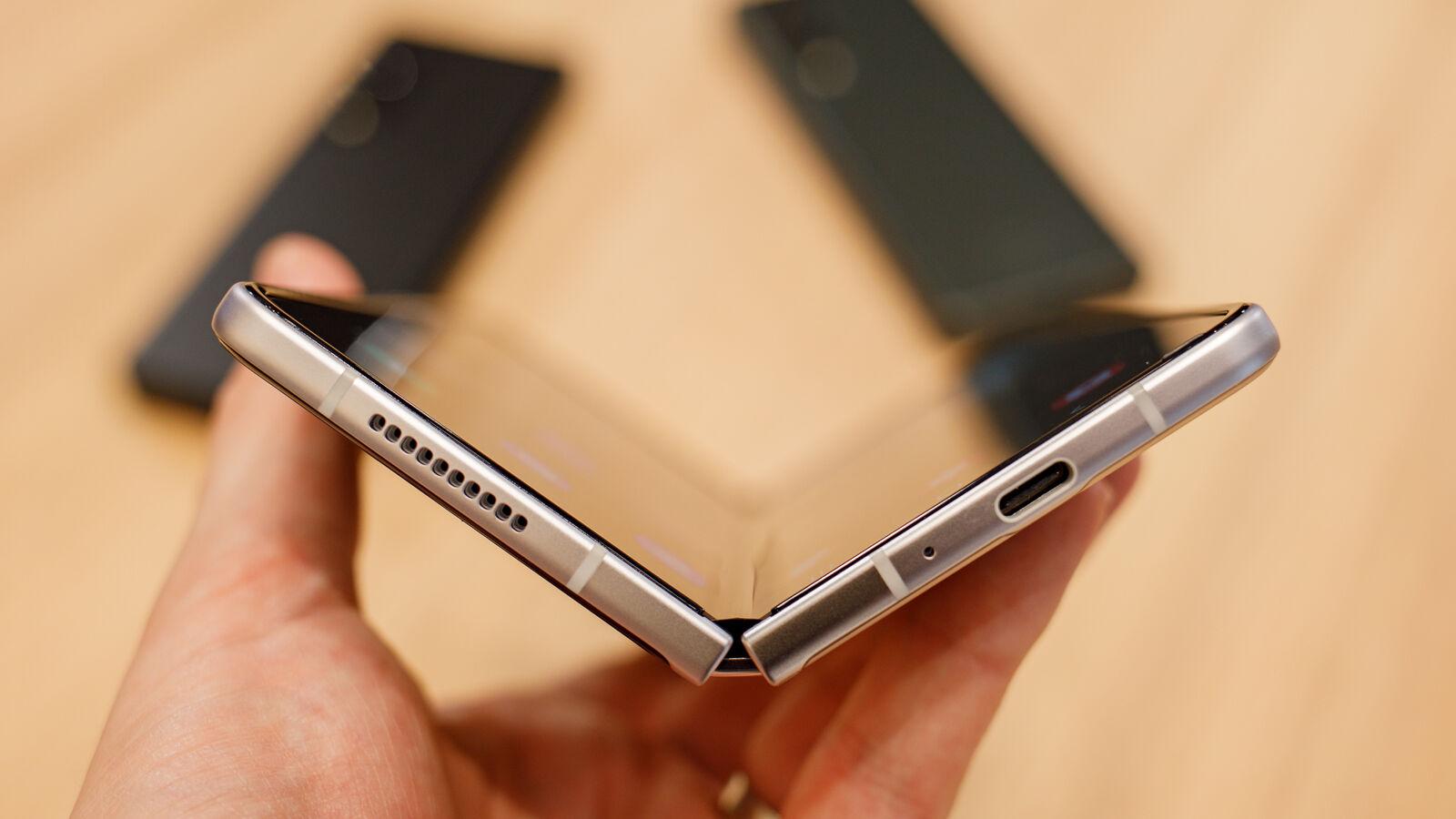 Samsung has been one of the leading lights in the recent arrival of smartphones with foldable displays.

At the moment it has two offerings in this category: the Galaxy Z Flip which – as the name suggests – is like a classic flip phone. The Galaxy Z Fold has a vertical hinge, where you open it up like a book.

New rumours have begun appearing regarding improvements we may see to the latter. Here’s everything we know so far about the Samsung Galaxy Z Fold 4.

When will the Samsung Galaxy Z Fold 4 be released?

Samsung hasn’t admitted the Galaxy Z Fold 4 even exists, even though rumours seem to suggest that it’s very much a reality.

Because of this, we don’t have any official details regarding the device, and that includes its release date.

But, we have seen reports that the new Fold will follow the pattern of earlier models. This makes it likely that we should see the Galaxy Z Fold 4 around the end of August or the start of September 2022 – almost certainly alongside the Galaxy Z Flip 4.

Here’s when the previous models launched:

Mass production of the Fold 4 has reportedly already begun, so things should be on schedule. Tech reporter Jon Prosser has said the phone will be announced on 10 August, with pre-orders live that day before an official launch date of 26 August.

Best in the business leaker Evan Blass backed up the 10 August date for the next Samsung Unpacked event with the below tweet of an official-looking teaser poster:

**THIS IMAGE HAS BEEN EDITED TO OBFUSCATE CERTAIN DETAIL**

See what I did there? pic.twitter.com/BrH4sT99yU

GSM Arena spotted the Fold 4 passing through the FCC in the US for certification in July with the model name SM-F936U, further showing how close we are to an unveiling. It’s also been certified in Thailand.

How much will the Samsung Galaxy Z Fold 4 cost?

Pricing has been somewhat moveable when it comes to foldables. Most started out at eye-watering amounts due to the incredibly cutting edge technology needed to make a folding screen possible.

As techniques have been improved and processes refined, this has seen a drop in the end-cost for consumers. Of course, these are still premium devices, and come with prices commensurate to this status.

To see what the Galaxy Z Fold 4 might cost, here’s a breakdown of the models that came before:

As you can see, there’s a downward trend, and that’s expected to continue. Industry expert Ross Young thinks so at least, reporting that Samsung doubled its July production of Z Fold 4 and Z Flip 4 units (relative to production of the third-gen models in 2021), which he believes means we “Might see a price cut.”

One interesting wrinkle this year is that Samsung may be changing its naming convention. The company has taken the ‘Z’ out of the names of its foldables in select markets without any explanation – though some speculate that it may have been in response to Russia’s invasion of Ukraine, with the ‘Z’ symbol sometimes used by Russia’s armed forces.

It’s opened speculation that the company may drop the ‘Z’ entirely, leaving its next-gen foldable simple called the Galaxy Fold 4. That would be cleaner and simpler, and in our eyes a welcome change, but for now there’s little concrete evidence that any branding change is on the way worldwide.

What about the Samsung Galaxy Z Fold 4 specs?

You’ve probably already surmised that no-one outside of Samsung yet knows for sure the tech specs of the Fold 4. But there have been some rumours appearing that throw light on what the new foldable may contain when it arrives, hopefully, in the second half of next year.

In terms of the chipset, there’s a good chance that the
Snapdragon 8 Gen 1 processor will make it to the Fold 4, though both
TheGalox and
Ice Universe actually predict it will instead adopt the rumoured
8+ Gen 1 that was announced in May 2022.

In fact, Ice Universe (who loves leaking Samsung specs) has tweeted a short spec sheet for the Fold 4 that he says is “100% accurate”:

These specs, if indeed accurate, would see a device very similar to the Fold 3, though with some camera and processor updates. Sammobile also reported there could be a 1TB version of the Fold 4.

Here’s every other major spec broken down by rumour.

As for the folding displays, a report from
TheElec adds small notes on the phone’s displays, which are apparently going to stay about the same size at least: 7.56in for the main display and 6.19in for the outer screen – each within 0.01in of the corresponding Z Fold 3 screens. That’s been backed up by display expert Ross Young, who specifically
repeats the prediction of a 6.19in outer display while comparing the Fold 4 to the upcoming
Pixel foldable.

There may be a subtler improvement here though. Both
TheGalox and
yeux1122 report that the Z Fold 4 will feature improved Ultra Thin Glass (UTG) on the folding screen. This will be “a big improvement” according to Galox, and have “improved hardness and quality” according to yeux1122, though the two disagree on the potential branding – either ‘Armor UTG’ or ‘Super UTG’.

Serial leaker Ice Universe also claims that while the crease is less prominent on the Fold 4 than the Fold 3, you can still see it.

yeux1122 has separately reported on a range of expected changes for the upcoming model, which include work on improving the hinge mechanism on the new Fold 4, which as you can imagine is a crucial feature of the design. Depending on how the refinements go, this is also rumoured to result in a lighter chassis – 254g supposedly, several slivers less than the 271g Fold 3.

This is good news as in our
Samsung Galaxy Z Fold 3 review we pointed out that while the design had improved from the earlier versions, it was still a heavy and cumbersome device, so losing a few grams could go a long way to addressing that concern.

The above report from
TheElec also says that Samsung is working on incorporating an S Pen slot into the chassis of the Z Fold 4, just as it has in the
Galaxy S22 Ultra this year. Presumably that would also mean the stylus will come bundled with the phone by default.

Others suggest that Samsung has moved on from this idea though. IceUniverse has tweeted that the phone “will not have built-in S Pen,” but that instead it will be “a little smaller and thinner.” It sounds like Samsung has struggled to incorporate the stylus without making the phone as a whole too bulky, so it may remain an optional add-on for now.

Rumours do state that Samsung will add improved dust-proofing, something that again seems very important when you consider the grinding that grit and sand can bring to that hinge mechanism.

Another criticism we had of the Fold 3 was the poor under-display camera. Yes, it does mean you don’t have to have a punch-hole aperture or a notch, but that’s not much use if the results aren’t up to snuff.

That means we’re a little concerned by one rumour that the under-display camera will not only be on the inside, as it was with the Fold 3, but also make an appearance on the external display as well. We hope that Samsung has mastered this technique, because the results on the Fold 3 were pretty terrible.

Still, leaks do agree that Samsung will be working to improve the camera experience elsewhere.

GSMArena alludes to an improved camera experience on the Galaxy Z Fold 4, but there are no specifics on how it would compare to the existing array of 12Mp f/1.8 main camera w/ OIS, 12Mp f/2.2 ultrawide camera, and 12Mp f/2.4 telephoto camera w/ OIS + 2x optical zoom.

GalaxyClub has a little more detail, reporting that the Z Fold 4 will adopt the 10Mp 3x optical zoom sensor found on the
S22 series. That’s a slight resolution downgrade from the Z Fold 3’s telephoto, but with a higher zoom level and other enhancements it is otherwise an upgrade. The site also reports that the phone will stick with a 10Mp cover selfie camera.

The 3x zoom sensor might not be the only one borrowed from the S22 line. Since then leaker Dohyun Kim has predicted that the Fold 4 will adopt a 108Mp main camera,
prompting fellow leaker Chun to chime in that in fact that whole rear camera array will be the same as that found on the S22 Ultra – though warning that this might be with the exception of that phone’s periscope camera, which might be dropped along the way.

The battery doesn’t seem to be getting any kind of boost in the Fold 4, which is a shame.
GalaxyClub dug through a SafetyKorea battery certification to discover that the two cells in the Fold 4 (one for each side of the hinge) will have a combined rated capacity of 4270mAh – almost identical to the 4275mAh rated capacity of the Fold 3. That means that the advertised typical capacity will almost certainly be the same 4400mAh as the previous phone.

It also seems as though the Fold 4 will stick with the now relatively sluggish 25W charging speed of the Fold 3.

Some of the coolest things the Fold line can do are down to the software. When a screen is larger, you can display more apps including in split screen modes that can fit two or even three on the inner display at once. The Fold 3 implemented this best so far, but to get to split screen mode you have to tap several icons and options, making it easy to forget the feature even exists.

Ice Universe says Samsung is working on a “swipe for split screen” gesture for One UI that hopefully will make going in and out of the mode a lot easier and more intuitive on the Fold 4. Given it’s software, it might well come to the older Folds too.

As a reminder, here are the key specifications for the existing Samsung Galaxy Z Fold 3:

To see what the Fold 4 will be up against, read our guides to the
best smartphones and
best phones coming in 2022.