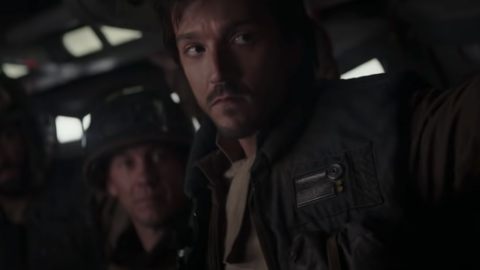 Rogue One, the 2016 Star Wars spinoff, is returning to theaters this month to help hype up the launch of the Rogue One TV series, Andor. The official Star Wars account confirmed that Rogue One: A Star Wars Story will come back to some IMAX theaters starting August 26.

But why go to a theater to see a movie released six years ago that’s already on Disney Plus? Disney is including an “exclusive sneak peak” at Andor as part of the theatrical re-release. Beyond that, anyone who hasn’t seen it already might be interested, and repeat viewers may want a refresher on the big screen ahead of the show’s debut on September 21.

“Everything I did, I did for the Rebellion.”Cassian Andor returns to the big screen in Rogue One: A Star Wars Story with an exclusive sneak peek at #Andor, in select IMAX theaters August 26. pic.twitter.com/iR8iD2c0n3

There is no word on what the “sneak peek” might include, but it’s probably some kind of new footage for the Disney Plus series. Diego Luna returns to play Cassian Andor in the TV show, which is a prequel to the film.

Rogue One writer Tony Gilroy returns to write the TV show. He has explained that Andor Season 1 is all about learning more about Cassian and what drove him to become a person who would sacrifice himself for the greater good without vanity or recognition for it.

“It’s about him being really revolution-averse, and cynical, and lost, and kind of a mess,” Gilroy said.

Andor begins with Cassian’s home world being destroyed and the journey he goes on to find a new home. “His adopted home will become the base of our whole first season, and we watch that place become radicalized,” Gilroy said. “Then we see another planet that’s completely taken apart in a colonial kind of way. The Empire is expanding rapidly. They’re wiping out anybody who’s in their way.”

Andor is just the latest live-action Star Wars series for Disney+. The streaming platform’s first new Star Wars show was The Mandalorian, which proved to be a success and spawned multiple seasons. The Book of Boba Fett followed, with the Obi-Wan series premiering in May. Jon Watts is making a Star Wars TV show that is in the spirit of 1980’s coming-of-age stories.