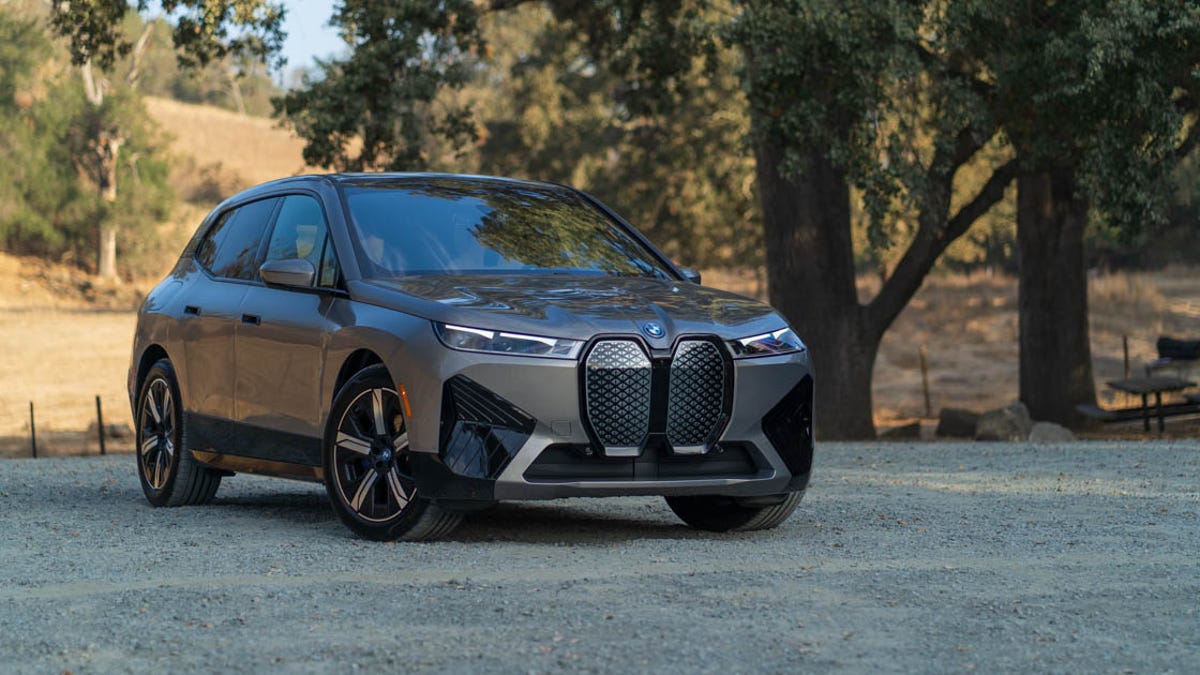 The M60’s electric powertrain is based around the same 111.5-kilowatt-hour (105.2 kWh usable) battery as the xDrive50 spec with the same DC and AC charging speed estimates. The iX M60 can accept up to 195 kilowatts of juice, adding around 90 miles of range in roughly 10 minutes or refilling from 10% to 80% in 40 minutes. BMW includes two years of complimentary 30-minute Electrify America sessions to get drivers acquainted with the network. At an 11-kW home or Level 2 public AC charger, owners can expect to spend up to 11 hours to fill the battery.

The biggest difference between the M60 and xDrive50 variants is the power output of the dual-motor electric powertrain. M60 drivers command up to 610 rear-biased horsepower in Sport mode and, when activating launch control, up to 811 pound-feet of torque with a wiggle of their right foot, a gain of 94 ponies and 247 twist units over the xDrive50. Stomping the accelerator, the M60 makes a case for its nearly $25,000 price premium over xDrive50 with exhilarating acceleration. The extra oomph shaves nearly a second off the SUV’s 0-to-60 time, at just 3.6 seconds versus 4.4. It’s a hoot, to be sure.

Yes, the iX M60 is nearly a second quicker to 60 mph than an Audi E-Tron S. On the other hand, well, it looks like this.

Top speed climbs from 124 mph to 155 mph (or 130 mph with all-season tires), although that’s mostly just for bragging rights over xDrive50 owners. Despite the iX M60’s impressive performance upgrades, this is not a track car; most of its miles will be logged on public roads with pesky speed limits.

The iX M60’s destiny as a hotted-up commuter that will spend its entire life bouncing over highway expansion joints and dodging surface street potholes feels at odds with the SUV’s overly firm suspension tuning. Standard equipment at this trim level includes rear axle steering, an air suspension (both of which are optional on the xDrive50) and M Sport brakes with blue calipers (which aren’t).

However, the M60’s air suspension has been recalibrated and mated with thicker stabilizer bars for more dynamic handling and a firmer ride. Of course, that’ll cost you a bit of comfort, which isn’t so bad when the road is glass-smooth. However, around my neck of the woods, the best driving roads are off the beaten path where the iX M60’s suspension proved more punishing over bumps and imperfections than BMW’s low-slung i4 M50 sedan, limiting my enjoyment and my speed, even in its most compliant Comfort setting.

Wheels measuring 21 or 22 inches are available. My example is equipped with the former, mated with performance summer tires, though all-seasons are also available as a no-cost option. I’d recommend sticking with the smaller rollers; the iX’s ride is firm enough that you’ll need all of the rubber you can get between your spine and the road.

The bigger wheels also come with a hit to range, dropping from 288 EPA-estimated miles with the 21s to a 274-mile range on the double-deuces. Of course, iX drivers looking to maximize range between road trip pit stops are probably better off sticking with the xDrive50, which gets between 305 and 324 miles depending on its wheel-and-tire combo.

Visually, the M60 spec differentiates itself with a unique front fascia that’s much more aggressive than the xDrive50. It’s almost too aggro, but in its defense the stronger angles and bold techno-cheekbones are a better balance with BMW’s new vertical kidney grille design. I’m not a fan of the iX’s design, but this is its best, most cohesive look.

Inside, the iX M60’s spacious, minimalist cabin is also largely unchanged compared to the xDrive50. BMW doesn’t outfit its performance variant with sport seats, an omission I don’t really mind for daily driving comfort, but also kind of missed when testing the SUV’s improved cornering capabilities.

My example features $300 blue seat belts and the $3,000 Executive package, which adds glass and open-pore wood controls to the center console. The wood is a nice natural touch in isolation, but there’s no wood anywhere else in the iX’s cabin, and it seems weirdly out of place the more I look at it. The Executive package also adds advanced driver-assistance features like hands-free Traffic Jam Assist, hands-free parking assist, adaptive cruise control, and lane-keep assist plus convenience features like soft-close doors. Overall, it’s an option box worth checking, even if you don’t want the aesthetic “upgrades.”

The wood controls are a nice touch, but they also don’t match anything else in the iX’s cabin.

Drivers can glide along silently or enable BMW’s Iconic Sounds to fill the cabin with artificial powertrain noise. The M60 features a unique Sport mode tone that’s throatier and louder than the base model’s for a more engaging experience when accelerating. Since my last stint behind the wheel, Relax and Expressive Iconic Sounds themes have been added to the iX’s My Mode menu, allowing me to accelerate and brake to the sound of an angelic chorus or a sci-fi soundtrack. These modes are entertaining and fun to show off to passengers, but ultimately too weird for sustained use.

My thoughts on BMW’s new iDrive 8 multimedia software have mellowed somewhat now that I’ve crested its steep learning curve and embraced its complicated but customizable interface. The system is built around a pair of huge displays that seem to float above the dashboard on struts. The left screen is the 12.3-inch digital instrument cluster while the right is a larger, 14.9-inch main touchscreen. iDrive 8 is a responsive system and, like the rest of the iX’s cabin, the high-resolution screens look fantastic and are customizable with themes featuring nature-inspired imagery.

When you first meet the main menu, it’s an overwhelming mess of almost 30 tiny icons, arranged in no particular order. Fortunately, these icons can be dragged, dropped and organized to your liking, so take a minute to do that before hitting the road. Additionally, eight shortcuts to almost any menu screen or infotainment function can be saved to a favorites menu for quick access by swiping down from the top of any screen; once I’d chosen these, I rarely needed to wade back through the main menu again. I still think the curated organization of iDrive 7 was a better out-of-the-box experience, but I can see how iDrive 8 has the potential to be more flexible over time.

Plus, there’s standard wireless Apple CarPlay and Android Auto compatibility, so drivers can simply bypass BMW’s tech and use the navigation and streaming apps on their phone. The iX even supports the latest quick-pairing tech for both ecosystems, so you don’t even need to fiddle with the menus to get paired up and running.

You won’t hear me say this often, but think twice before splurging on the more powerful variant.

The 2023 BMW iX M60 starts at $109,895 including the $995 destination charge — a $24,800 premium over the xDrive50 spec. A more apples-to-apples comparison with an xDrive50 with the Dynamic Handling package upgrades, brings the delta down to a still-considerable $17,700. Add my example’s Executive package and blue belts to bring the as-tested price to $113,195, which feels like an even tougher pill to swallow.

Factor in the comfort compromises and the big hit to range and it feels like you’re paying a lot more for a fair bit less. The iX M60 is undoubtedly faster and more exhilarating. But unlike the BMW i4 eDrive40 and the i4 M50 where the extra performance enhances the sport sedan, here the power comes at too great a cost. Most people shopping for a vehicle in this class will find the BMW iX xDrive50’s 516 hp and 4.4 second 0-to-60 sprint exciting enough and a much better value.