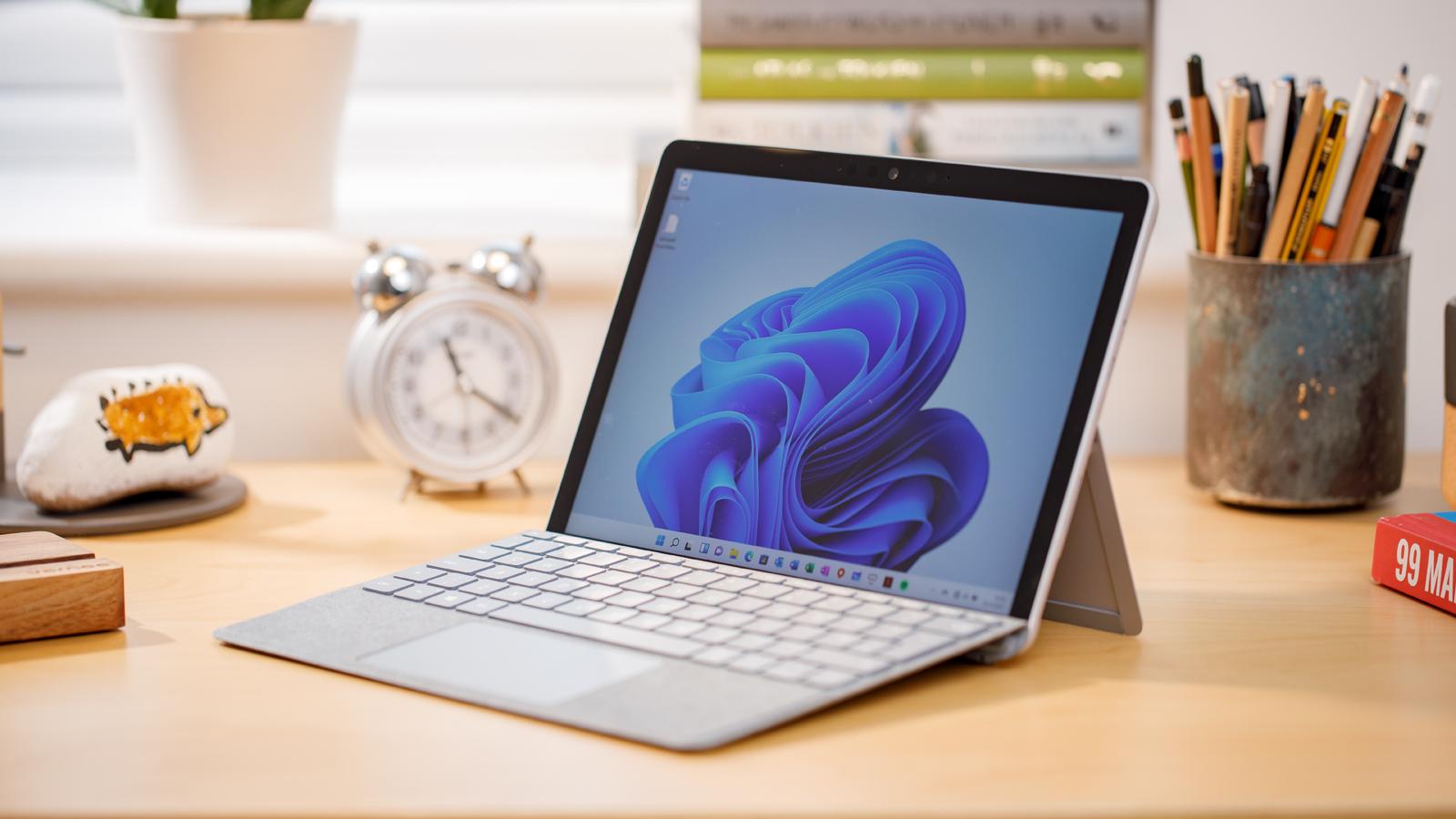 When the original Surface was unveiled in 2012, few could have predicted the way Microsoft has established itself as a hardware company. A decade later, there are loads of different devices to choose from, ranging from budget tablets to high-end hybrid PCs.

But whether you’re looking for the flexibility of a 2-in-1, reliability of a regular clamshell laptop or even a folding phone, there’s a Surface device that will suit your needs. For more information, see our full guide to the best Microsoft Surface devices.

They’re also frequently discounted, especially if you’re happy with slightly older hardware. You’ll often find Surface products in our laptop deals and tablet deals articles. But with Prime Day just around the corner, we have separate guides to Prime Day laptop deals and Prime Day tablet deals. But if you’re set on Microsoft devices and based in the UK, you’ve come to the right place.

The Surface Pro 8 has been frequently discounted since launching, but this excellent deal might not be around for long. Amazon also has £130 off the 256GB model.

It’s a modest discount, but it means the Surface Go 3 is 9% cheaper than is RRP at launch. You can also bundle it with a choice of keyboard covers.

There haven’t been many deals on the Surface Laptop Studio since it launched in 2021, but this Amazon discount is one of them. Stock is limited, but there are models available via third-party sellers too.

This is the first deal we’ve seen on the new Surface Laptop Go 2. This mid-spec model is now available for under £600.

The Surface Laptop Go’s successor has arrived, but it remains a capable device that will serve you well for many years. This mid-spec model is the lowest price it’s been, aside from Black Friday.

If you don’t mind slightly older hardware, the Surface Go 2 remains a great portable PC. The top-spec model with 4G connectivity is currently available with a useful £144 discount, but you can also save £120 on the WiFi-only version. Keyboard covers are still sold separately, though.

How to find Microsoft Surface deals

These are all technically updates to existing products, with the Laptop Studio succeeding the Surface Book line despite its very different form factor. This is the current range of portable PCs:

Several of these are included in our dedicated guide to the best Surface devices. Microsoft doesn’t appear to have plans to bring the Surface Neo to market anytime soon, well over three years after it was officially announced.

Your first port of call should be the Surface deals page on the Microsoft website, where you can save up to £860 at the time of writing. When the company offers deals on its products, other retailers often follow suit –  knowing Microsoft’s discount is a useful indicator of how much you’re saving in reality. Remember to compare the specs of the model you’re buying against the price set by Microsoft for the same configuration.

Retailers sometimes unfairly use images of the Surface tablets with the Type Cover as well, even though it’s not included. Ensure you double-check the details before going ahead with your purchase, although most retailers offer at least a 14-day window for returns.

Where to find the best Microsoft Surface deals

Aside from going direct to the Microsoft Store, comparing prices against different retailers and e-retailers is always a good idea. In the UK, it’s worth checking the following:

In the US, these are your best bet:

If you shop on Amazon, signing up for a Prime membership can also get you free next day delivery and access to limited-time Lightning Deals 30 minutes before non-members. You can
sign up for a 30-day free trial, which can be cancelled anytime before your next payment is due.

The
Surface Pro 8 was released in October 2021, delivering big upgrades to Microsoft’s flagship 2-in-1. Here’s how much it costs today from all of the major retailers, although be aware that variation in price may be due to the different configurations:

Surface 2-in-1s (such as the Pro 8 and Go 3) don’t come with the Type Cover or other accessories in the box, so you’ll have to buy them separately. This can add significantly to the overall price, so we recommend looking for bundle deals wherever possible. If that’s not possible, it’s worth checking if any discount offered is significant enough to offset the price of buying accessories separately.

Type Covers, the detachable keyboards for Surface tablets, are an accessory most people won’t be able to do without. Just make sure the one you opt is compatible with your Surface device – older Surface Pro Type Covers won’t work with the Pro 8.

The Surface Go Type Cover ditches this dedicated stylus, but it’s slightly more affordable. You can expect to pay around
£124.99/
US$129.99, and they’re compatible with all three generations of the Surface Go so far.

However, like the Surface devices themselves, plenty of accessories are regularly discounted. Look out for deals both direct from Microsoft and via third-party retailers.

How to know if a Microsoft Surface deal is good

It’s not always easy to know just how good a Surface deal really is. If you’re unsure, check the original RRP or sites such as
PriceSpy or
Google Shopping to see how other retailers are pricing it.

For products on Amazon,
CamelCamelCamel is a great way to see how the price has changed over time. Deals aren’t always as great as the retailers claim they are.

If those methods aren’t working for you, it’s worth heading direct to the manufacturers website to see how much it is there. Third-party retailers sometimes market a new price as a deal, when in reality the product is now widely available at that price.

Another option is to check trustworthy review sites, such as Tech Advisor. Not only will this give you a good indication of how good the Surface device really is, reviews are usually published shortly after the product is released. That means the prices quoted usually reflect how much it cost at launch.

Microsoft also includes a range of devices in its education pricing, which means students and teachers can save 10% on the usual RRP. See the full range of
student deals on the Microsoft website.

That same 10% offer is also available via
UNiDAYS if you prefer, but you’ll need to validate your status in full-time education wherever you buy from. This is usually done by checking your email address against official records.

Should I wait for more Windows 11 devices?

There’s no need. The vast majority of Windows 10 hardware is eligible for a free upgrade to Windows 11, including all the devices mentioned above (except the Android-based Surface Duo).

You’ll have to go back as far as 2018’s
Surface Go to find a Microsoft PC that doesn’t support the new OS – anything newer will be just fine.

Officially,
Windows 11 has almost completed its gradual rollout, which has taken several months. But even if your device can’t download it yet, there’s an easy way to
get the final version right now. This is an official method, with all your files and settings remaining intact.

Provided it meets
Windows 11’s hardware requirements, there’s no real downside to buying a Windows 10 device over a Windows 11 one.

Learn more in our separate guide:
Should I still buy a Windows 10 laptop or PC?

Should I buy refurbished?

While deals come and go, one place you’ll consistently find low prices is on refurbished tech. This typically means it’s either been used as a demonstration model or returned by a customer, meaning it can no longer be sold as new. In all situations, the companies selling them will fix any faults and give the device a full refresh before it’s marked as refurbished. That means it’ll be in excellent condition by the time it reaches the customer, perhaps even as good as new.

That’s the big difference when compared to used tech, which may be damaged in some way or have reduced battery life. See more in
our guide to refurbished tech.

If you’re happy with an older model of a Surface device that’s been pre-owned, you could save a lot of money shopping refurbished. We would recommend that the model you buy is certified refurbished, as these are rigorously tested and backed by Microsoft to work like new. You also get a one-year hardware warranty.

Microsoft’s site should be your first port of call, but there are several third-party retailers worth checking. These include
Laptops Direct and
musicMagpie, both of which clearly describe the condition of the device you’re buying. There’s also
Amazon’s Renewed program, where all devices are tested to work and look as new,.