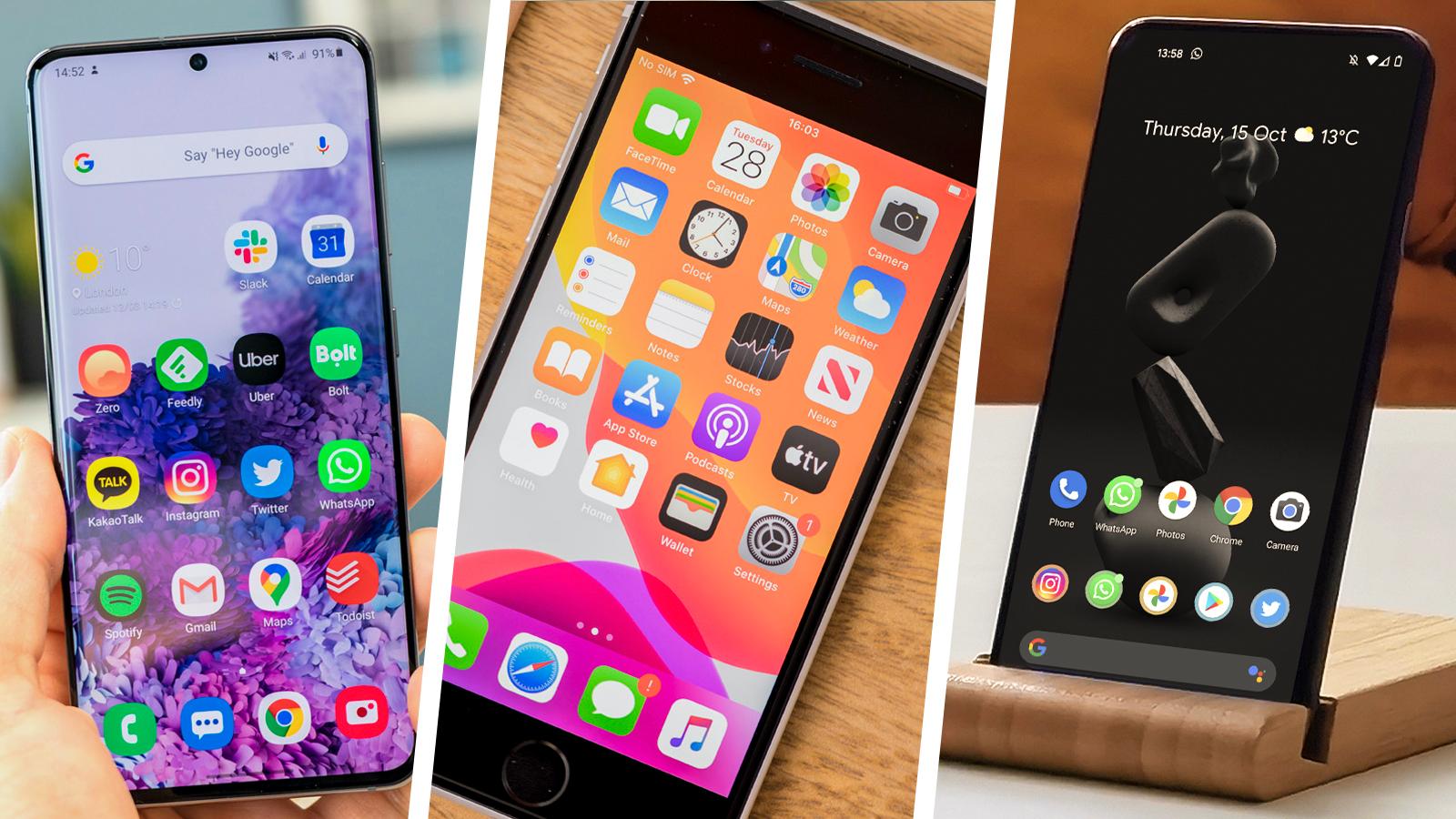 Bigger isn’t always better, with regards to smartphones, and this list best represents the top picks for worthwhile small phones on the market in 2022, right now.

When the 4.7in display iPhone 6 was released, many were outraged at the size increase. Nowadays, such a screen size is considered comically small.

Simply put, phones have gotten too big. Bezels on phones have shrunk significantly in the last few years, but that doesn’t mean people are suddenly willing to wield a 6.8in monster, like the Samsung Galaxy S22 Ultra.

People with smaller hands are going to find a permanently two-handed phone an inconvenience, not just when in-hand but when it’s constantly poking out the top of their jeans pockets too. Handsets of a smaller size can be used one-handed, fit in a pocket or bag far more easily, and can do everything a bigger phone can do in a more compact package.

There’s also the matter of foldables to now consider, with devices like the revived Motorola Razr and Samsung Galaxy Z Flip 3 embracing the clamshell designs of old but combining them with new foldable display technology, giving you the best of both – a larger-screened device in a compact package.

Easily the best small phone around – considering the size-to-performance balance it strikes – with its (still 60Hz) 5.4in Super Retina XDR OLED display.

The 13 Mini runs on the same cutting-edge A15 Bionic chipset found in the rest of the series and it also benefits from more base storage and a bigger battery, compared to its predecessor (even if longevity is still behind that of rivals).

The dual rear 12Mp camera also enjoys improved stabilisation, better sensors and new shooting abilities – like Cinematic mode, while the selfie snapper is among the best in the business.

The screen might feel a little cramped to type on, so try one out in an Apple Store before you buy, if you can, and think hard about the price, as 2020’s iPhone 12 Mini is still a superb small phone offering that now costs even less.

The Pixel 6a has a 20:9 6.1in AMOLED screen so is taller than the iPhone 13 mini, but it’s still a slender and manageable size compared to most modern smartphones. It’s a 60Hz panel, the same as the iPhone, but other small phones have higher refresh rate displays.

The Pixel is our favourite smaller Android phone thanks to top drawer performance from the Google Tensor processor, the same chip as in the larger and more expensive Pixel 6 and 6 Pro. The 12.2Mp main camera is also one of the best in the game thanks to Google’s clever HDR software that processes shots excellently.

Battery life is also excellent and better than many other high-end phones and small phones alike. It’s a shame the charging is a little slow, but the pay off is worth it in the end when the phone only costs $449/£399/€459. Add to that lots of clever Google features like spam call answering, great on-device transcription, and photo tools, and this is one pocketable powerhouse.

More affordable than ever

Still needs to be tougher

Samsung took its already-groundbreaking Galaxy Z Flip foldable, improved every aspect – from design to performance – and then made it cheaper too!

The Z Flip 3 is a beautiful expression of the evolution of foldable smartphone tech and somehow manages to incorporate water resistance into its design. As such, you get a phone with a pretty sizeable 6.7in 120Hz Full HD+ AMOLED that folds in half, making it much more pocketable.

Battery life and the dual cameras could be better but despite flagship-class performance in a groundbreaking design, the Flip 3’s pricing also proves that foldables can tango in the same space as conventional high-end smartphones without any major sacrifices.

The iPhone 12 Mini serves as the smallest of the four handsets from Apple’s 2020 line-up and still boasts an impressive size-to-performance ratio.

On the front, you’ll find a beautiful 5.4in display that extends across the entirety of the phone’s front (save for the Face ID-capable notch).

It also packs in a pair of stellar cameras,
MagSafe for iPhone-compliant wireless charging and what is still one of the most powerful SoCs out there, in Apple’s own A14 Bionic. 5G is included too, if that’s what you’re looking for.

Even though it lacks a ‘Mini’ in its name, the size of Apple’s standard and ‘Pro’ phones still come in below the average, thanks to the size of most Android alternatives.

The iPhone 13 Pro sits at the top of that pile, offering the latest and greatest in terms of raw performance (from its A15 Bionic chip), along with a trio of excellent cameras that boast support for Apple’s ProRAW and ProRes still and video standards; not to mention a few more experimental features, like Cinematic mode that – after a little tuning from Apple – will leave you impressed.

Battery life is also hugely improved and the 13 Pro also finally integrates ProMotion onto an iPhone, with a 6.1in Super Retina XDR display that supports a dynamic refresh rate up to 120Hz.

MIUI isn’t for everyone

If you want a small but powerful Android phone with more a little more kick than 2020’s Pixel 5, 2022’s Xiaomi 12 is a brilliant alternative.

While it loses out on the 13 Pro’s high refresh rate display, the iPhone 13 still boasts cutting-edge features like Apple’s newest A15 Bionic 5nm chip and the latest camera features, including Cinematic Mode.

The rear camera system now sits at a diagonal, primarily to accommodate the impressive sensor-shift OIS (optical image stabilisation) that was exclusive to 2020’s
iPhone 12 Pro Max (although there’s still no telephoto sensor), while on the front – despite the same 60Hz refresh rate as before – you get a stunning 6.1in OLED display, complete with a 20% smaller notch.

Like the 13 Pro, some of the best battery life on an iPhone comes as part of the iPhone 13 experience, but fast charging speeds are still well behind the curve

The Asus Zenfone 8 is a surprisingly powerful phone for its price, and offers a well-balanced set of specs and features.

Like most modern Android flagships you can expect a 120Hz AMOLED display, measuring 5.9in. The phone is powered by last year’s flagship Snapdragon 888 chip, and can come with up to 16GB of RAM alongside it.

Battery life is the main disappointment – it’ll last the day but not much more – and we think the design is a little dull. But if you don’t mind those drawbacks, this is one of the smallest Android phones right now.

The Xperia 5 III takes Sony’s flagship
Xperia 1 III specs and squeezes them into a compact body; much like Apple does with its Mini models.

That means you get a 120Hz AMOLED display in Sony’s trademark slim 21:9 aspect ratio, but in this phone it measures just 6.1in across the diagonal. Sony has also packed in advanced speakers and audio features, along with a modern rarity: a headphone jack.

Top specs round out the phone, and the camera is also notable: this is one of the few small phones to include a periscope lens, going up to 4.4x zoom.

It’s a bit expensive, but this is one of the most powerful small Android phones around.

Cheap (for an iPhone)

The iPhone SE is one of Apple’s smallest iPhones – only the two Mini models are more petite – but it’s not our first choice.

That’s mostly because Apple’s has stuck to its old iPhone design here, meaning that while the SE is small, a lot of that space is wasted by a big black bezel and Home Button. That means the display is absolutely tiny and still low resolution – other small phones will feel bigger.

Still, you get the same processor as the iPhone 13 series, along with wireless charging and water-proofing. And while there’s only one rear camera it is pretty good – though not at night.

Buy this if you can’t afford either of the Minis, but otherwise it’s better to stretch your budget if you can.

Related: How we test smartphones