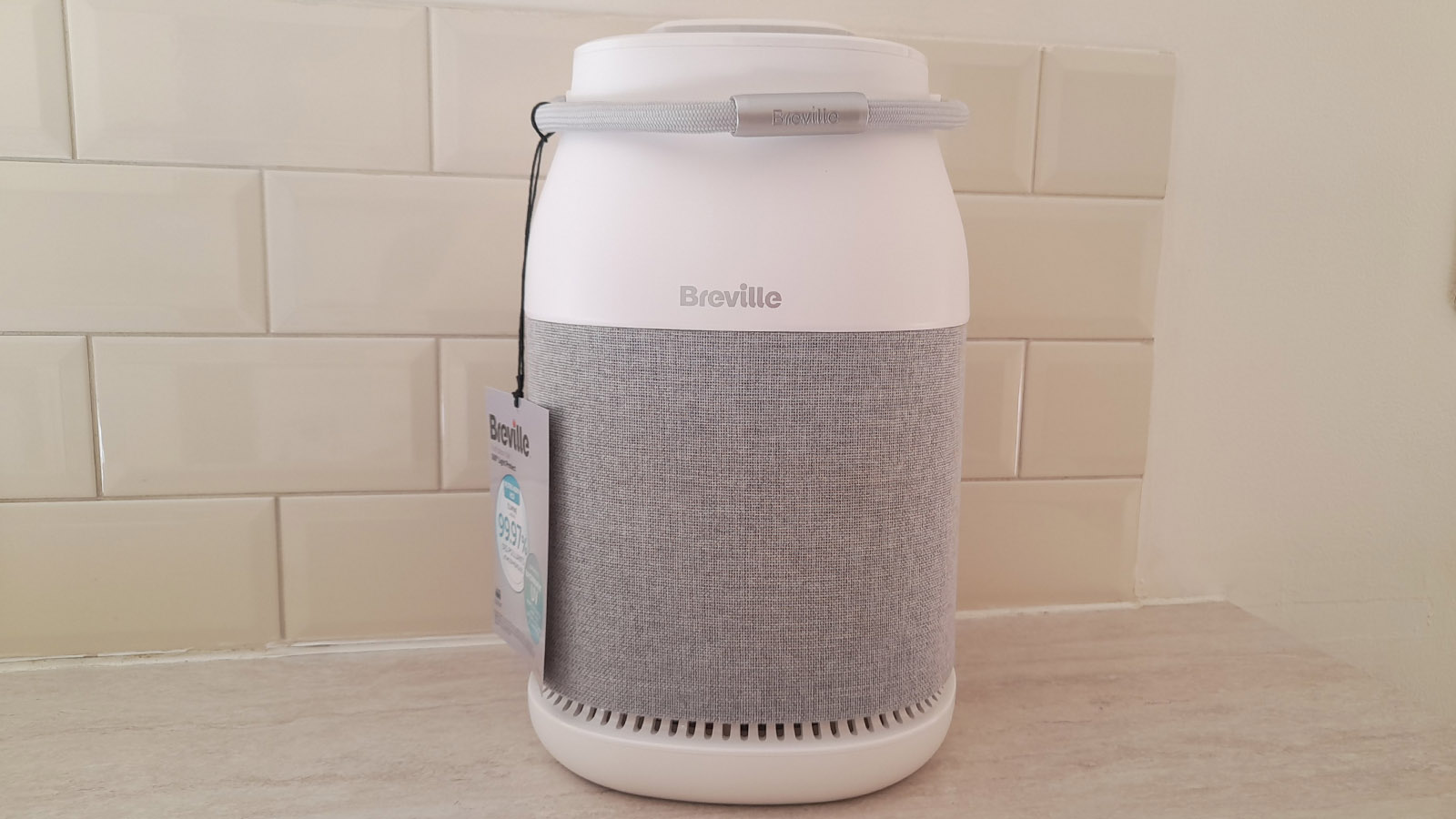 This compact air purifier is portable, well-priced and effective. However, its lack of a display will frustrate those who want to monitor their home air quality levels.

Not available in the US

When does an air purifier not look like an air purifier? In the case of Breville’s 360° Light Protect, it’s when it looks like a home decor accessory in the style of a ceramic milk churn, complete with a woven handle.

Okay, this Breville air purifier isn’t actually made of clay: it’s robust white plastic with a grey fabric cover over the 360-degree air intake grille. But the shape and style of the air purifier softens what might be quite a severe domestic appliance silhouette into a more traditional and cosier object for the home.

The woven grey handle finish allows you to carry the 3kg (7lbs) purifier from room to room quite easily. There’s no need for wheels at this kind of weight, but it’s worth noting if you have health problems that make carrying, say, a shopping bag difficult.

At a height of 38cm, it’s not particularly imposing and at a diameter of 23cm (although it’s not circular but a very rounded square), it’s roughly the same footprint as a typical plant pot stand. The white power cable is a handy 180cm long.

The air vent is at the top and the control panel sits in the middle of this.

The air intake grille wraps around the entire appliance; it doesn’t just take from a grille on one side of the purifier. It has six layers of purification: two of which are optional.

The first layer is the fabric filter, which is a vacuum-cleaner friendly fabric, and captures larger particles like hair, pet dander and lint. The second layer is a pre-filter.

The third layer is the True HEPA H13 filter, which captures up to 99.97% of impurities as small as 0.3 microns in size, as well as allergens including dust, pollen, and mould spores.

The fourth layer is an activated carbon filter, which tackles odours and gases from pets, cooking, and smoke. The fifth layer, an optional one, is UV sterilisation that helps to reduce the reproduction of germs, viruses, bacteria, mould, and fungi trapped in the filter.

There’s also the option to employ an ioniser, which releases negative ions into the outgoing filtered air and helps to bind together airborne impurities so they can be more easily captured.

The actual filter itself is a hollow cylindrical unit that fits into the body of the purifier. Unscrew the bottom of the purifier to access it, and it is 2.5cm in thickness.

The 360 purifier is also AHAM-certified. This is a certification programme, run by the Association of Home Appliance Manufacturers and recognised by the EPA, that provides a uniform and commercially practical verification of manufacturers’ certified Clean Air Delivery Rate (CADR) for tobacco smoke, dust and pollen – but we’ll talk more about CADR later on.

There’s no screen, just a simple, grey touch panel with corresponding indicator lights. It hosts a power button, fan speed multifunction key to choose between the three speeds, a UV light button and an ioniser button.

To the right, there’s a timer button to switch the purifier off after 4, 8 or 12 hours, a night light button, which controls a warm white soft glow ring light under the control panel, and the night mode button, which dims the control panel icon lights. If the filter needs replacing, a filter light indicator will illuminate.

Of course, what’s missing are any real-time air quality indicators. You don’t get air particle readings or a traffic light spectrum to show you how bad your room air may be, nor how much better it is after the purifier has been working for an hour or two.

For some people, this lack of data will be a real sticking point, but this price point, you have to weigh up whether you are willing to pay more for this feature.

There are also no smart features and not even a remote control, so everything needs to be done on the appliance itself.

The set up process is simple. Take the purifier out of the box, unscrew the bottom to remove the plastic from the filter, screw the bottom back in, plug in and press the power button.

In terms of noise, we found the fan speed setting at I to be quieter than a desktop PC. Breville states this speed setting is around an average of 33dB, and we believe that to be accurate.

Fan speed setting II is similar to a vacuum cleaner, and fan speed setting III is akin to a powerful hair dryer – this really forceful output of air is, we suspect, more of an emergency mode. Use it if your kitchen is full of smoke from burnt toast or smoke from a neighbour’s bonfire has plumed through an open bedroom window.

Our first experiment was a night-time use on a timer of four hours at fan speed setting I with the UV and ioniser turned on and the night mode dimming the display lights. The noise did not disrupt sleep, and the air in the room the following morning was fresher and less stuffy.

The second experiment was similar to the first, but the purifier was left to work throughout the night. Our test subject reported that the purifier appeared to aid a deeper level of sleep, and again, the air in the room was fresher the following morning.

The 360 does have a noticeable effect on air quality that an average person can sense. But there’s no way to check what it’s picking up because of the lack of real time air quality indicators.

In terms of cleaning, you wipe the outside of the purifier with a damp cloth, the vent can be dusted with a soft brush, and you can vacuum the filter cover fabric.

Breville states the 360 Light Protect will filter rooms up to 79m2 in one hour, so for a medium sized room of 16m2, you will get five air changes per hour.

We think this is pretty good for its size and the price point.

Breville says that the filter should last up to twelve months, although this depends on when and for how long you use the purifier. The filter replacement light will come on when you need to change it.

The 360 Light Protect is available in the UK from Argos, Amazon and Freemans for £150. You’ll also need to factor in the cost of replacement filters, which have an RRP of £34.99 but are often available for less. You can buy them from Amazon.

This air purifier is 38 watts. It has a similar power consumption to a laptop, or maybe a video game system, and is less than some of the other more powerful air purifiers we have tested that have come in at 45 or 48 watts.

We like the 360 Light Protect air purifier. It’s a nice shape and design for a home, it’s lightweight and portable, and it does what it is supposed to do. Okay, you don’t get any fancy air quality readings, and you can’t control it from your smart phone, but at the price point, we think it’s worth considering if you want something to filter the air of your bedroom or your home office.