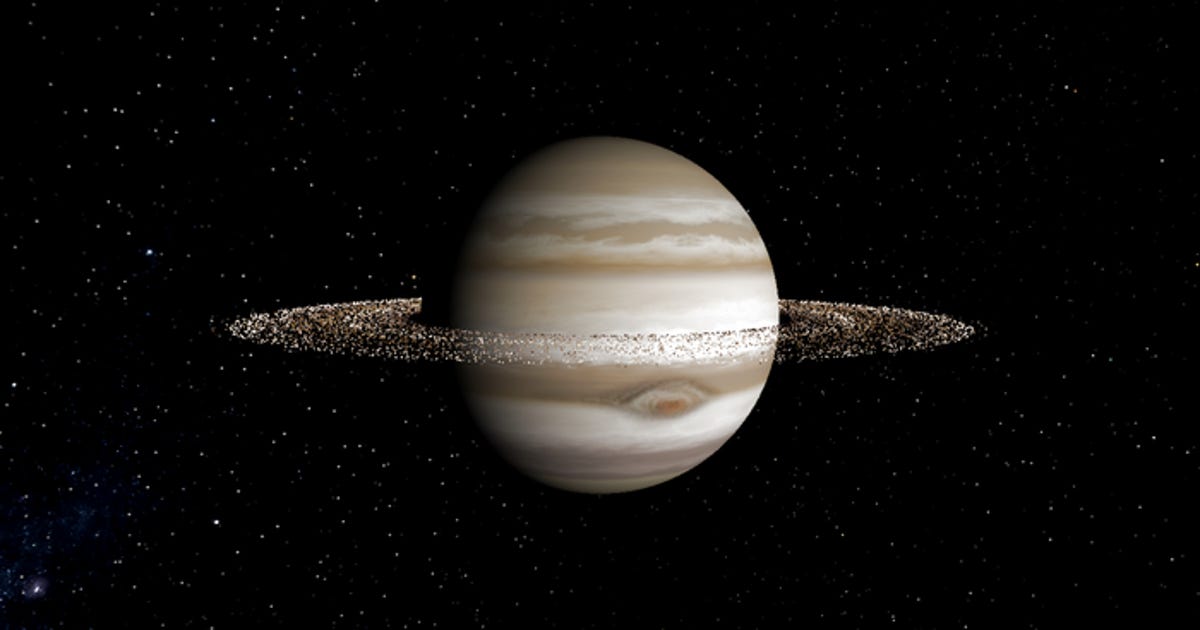 It’s made of gas, yet more than twice as massive as every other planet in our solar system combined. It’s surrounded by 79 separate moon companions, one of which is the leading candidate in the quest to find extraterrestrial life. It’s even named after the king of the ancient Roman gods. Jupiter seems to have it all — except cool rings, that is.

For some odd reason, this alpha planet has rings that are to Saturn’s spectacular hoops what chopsticks are to tree trunks. Flimsy. Insignificant. “Unlike Saturn’s icy rings full of large icy and rock chunks, they are composed of small dust particles,” according to NASA. Jupiter’s discs are so frail that we didn’t even notice them until 1979, thanks to the agency’s Voyager 1 spacecraft and a bit of lucky, perfectly placed sunlight.

But on Thursday, researchers who set out to understand why Jupiter has this loopy deficiency said they might’ve finally found an answer. Details of their conclusions can be found on arXiv, and are soon to be published in the Planetary Science Journal, per a press release.

“We found that the Galilean moons of Jupiter, one of which is the largest moon in our solar system, would very quickly destroy any large rings that might form,” Stephen Kane, an astrophysicist from the University of California, Riverside, who led the research, said in a statement. “As a result, it is unlikely that Jupiter had large rings at any point in its past.”

Saturn’s rings, photographed by the Hubble Space Telescope, are mesmerizing against a dark sky.

In other words, Kane and colleagues believe the gravitational pull and sheer force of Jupiter’s orbiting moons — especially the four largest Galilean ones — would’ve obliterated any and all matter attempting to produce Saturn-like rings around the gas giant.

“Massive planets form massive moons, which prevents them from having substantial rings,” Kane said. Potentially, this might also explain why Neptune’s rings are so lightweight as well – though the azure orb’s halos are still slightly more substantial than Jupiter’s, from the vantage point of Earth.

Jupiter and some of its moons are seen through the NIRCam 3.23 micron filter of the James Webb Space Telescope. If you look closely, you can see the planet’s flimsy rings, too.

NASA, ESA, CSA, and B. Holler and J. Stansberry (STScI)

To reach their conclusions, the team basically ran dynamic computer simulations of Jupiter’s Galilean moons in orbit, as well as of Jupiter itself orbiting the sun. Then they waited and watched to see how long it’d take for some Saturn-like rings to form, if they did truly form, and observe what happened as they began to take shape. “The results largely demonstrate the truncation of stable orbits imposed by the Galilean satellites,” the study states, “and dynamical desiccation of dense ring material” within a specific region.

In a way, it’s unfortunate that Jupiter’s moons have been gatekeeping awesome rings from the peach-stripe, windy world — for both scientists and amateur space fans.

First off, if Jupiter did have rings, they’d appear brighter to us than even Saturn’s, Kane said, because it’s so much closer. Saturn is nearly twice as far away from Earth. And second, rocky or icy rings can carry quite a bit of information for scientists looking to understand a particular planet’s past.

“For us astronomers, they are the blood spatter on the walls of a crime scene. When we look at the rings of giant planets, it’s evidence something catastrophic happened to put that material there,” Kane said. Prior to conducting the simulations, in fact, Kane had hoped Jupiter held some stronger rings long ago, but perhaps lost them over time. It’s possible for such rings to be temporary, the researcher reasoned.

The Galilean moons of Jupiter. Europa is the one thought to possibly hold evidence of alien life.

“It’s long bothered me why Jupiter doesn’t have even more amazing rings that would put Saturn’s to shame,” Kane said, also mentioning the next step for the team’s research. It’s also poised to be about planetary ring mysteries, this time of Uranus, another gas planet.

In essence, the study researchers think it’s possible Uranus appears tipped over on its side because of a collision with another celestial body long, long ago. Drawing on Kane’s blood spatter crime scene analogy, they believe its rings hold secrets that’ll decode whether their suspicion is correct.