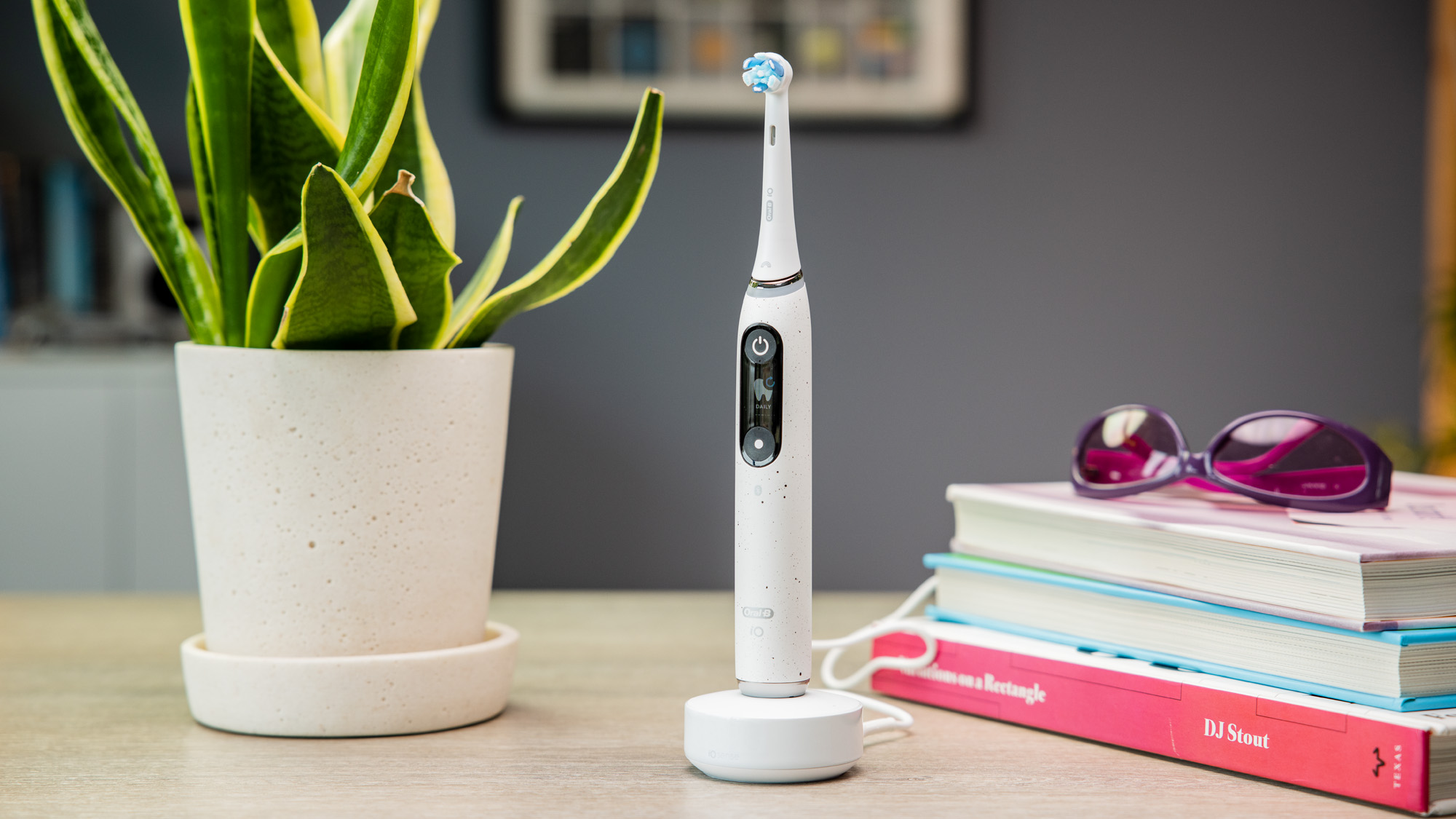 There are lots of things to like about the flagship iO10 from Oral-B but the sky-high asking price means that we’d expect better in certain areas.

Not yet available in the US

Oral-B is the brand that springs to mind first when thinking about electric toothbrushes and the firm is back with another flagship model in the iO Series 10.

As you might expect, this replaces the iO9 at the top of the pile and comes with a range of improvements and new features, including live coaching built into the iO Sense smart charger and advanced pressure recognition.

The question is, can you stomach this toothbrush’s whopping £800 asking price?

There’s not a huge amount of things you can do with the design of an electric toothbrush but Oral-B has done its best with the iO10.

You have all the usual things in place, including a full-colour OLED screen built into the front with a power button above and a menu button below.

Most of the time, the screen will show you things like brushing time and various smiley faces once you’ve finished, while the menu has various options, including cleaning modes and customising the ring light at the top.

That will pulse when the iO10 is charging but also serves as a pressure indicator – more on that later.

The iO10 is available in black or white colours and has a speckled design meant to represent the night sky, although the white model I tested reminds me more of a granite kitchen worktop.

I like the smooth soft-touch finish to the body and the way the interchangeable heads have small icons on the front such as a rainbow or diamond to help you remember which is yours (if sharing) rather than a coloured plastic ring.

However, the brush doesn’t detect different brush heads as different people, so it’s not ideal for sharing one handle between multiple people if you want to track all your brushing and get stats on the app.

It’s via the iO Sense smart charger that the iO10 really differentiates itself from the other Oral-B models and rivals.

The toothbrush stands in the middle of this when docked and is held in place with magnets, though they aren’t hugely strong so it’s not the most secure solution. I knocked the iO10 on the floor a couple of times, although it doesn’t help that my bathroom is a little cramped.

The base has a digital clock on the front to time your brushing but also a set of six lights on the top to coach you in real-time – more on how they work below. When it’s not timing your session, it conveniently doubles as a digital clock, although only once you’ve set it up via the app.

The brush comes with a travel case which can hold the brush handle and one toothbrush head. While it does the job on a basic level, it has a surprisingly awkward button to release the lid and doesn’t have USB charging as rumoured.

Instead, you’ll need to use the supplied charger. If you’re in the UK, it fits a shaver socket. You also get a refill holder which fits two brushes.

It took me a number of attempts to get the iO10 synced up with my phone. However, I didn’t even do this for a couple of weeks which tells you a lot about how much you need it.

The clock function on the base is a real boon (it needs Wi-Fi) but unlike other iO brushes, you don’t need the app for guided coaching. Said base has a ring of six lights which gradually turn from blue to white as you brush each zone.

When each zone has had enough brushing action, it performs a little light show and you know when you’re all done because all six lights will dance, flashing white and blue. The app does have slightly more advanced coaching with front, top and back elements if you want to get in-depth and do things like collect badges for achievements as if it were some kind of fitness tracker.

However, I typically found that taking my phone in to brush my teeth was a pain and using the base is much more convenient.

My gripe with the base is that the tracking around the six zones can often be slow to keep up as you move round. Even worse, it sometimes thinks you’re brushing the opposite side of your mouth, so you must use your own judgment.

The pressure sensor works very well indeed, and both the ring light and the base will turn red if you’re pushing too hard. You’ll have to rely on the handle light to know if you’re not applying enough pressure, though.

This will go from green (correct pressure) to whatever colour you’ve set the ring light to. Perhaps a bit confusing if you’ve set it to orange rather than white, for example.

The pressure guidance, combined with the Ultimate Clean brush heads I tested with – which have things like twisted ‘tuft-in-tuft’ angled bristles for better reach, resulted in an excellent performance.

Compared to my old but still decent Philips Sonicare, the iO10 leaves my teeth and gums feeling much cleaner and a couple of places which are normally a problem area aren’t so much with the iO10.

I typically used the iO10 on the Daily Clean mode, but you have a further six to choose from: Sensitive, Gum Care, Intense Clean, Whitening, Super Sensitive and Tongue Cleaner. That’s more than other iO brushes like the Series 5, which appropriately has five.

The iO10 also charges more quickly: around three hours compared to 12 of the Series 5. With the base in your bathroom this shouldn’t matter much.

On the Daily Clean mode, the iO10 uses around 5% of the battery power for a 2-2:30 minute brush so you should be able to get around 20 cleans if you’re travelling and don’t have any way of charging it. However, it’s not perfectly reliable: the iO10 had a stated 4% battery power, then powered off a few seconds after hitting go.

The price, as with so many electric toothbrushes, is where things get a bit tricky, in the UK at least. It’s not yet available in the US, but you can join the waitlist. The iO10 might be a flagship, top-of-the-line, model but I definitely did a double take at the £800 price.

That’s more than a lot of high-end smartphones, but the RRP for a toothbrush is something of a misnomer. It’s really just that price for a short time so that when it gets an inevitable discount, it appears to be a great deal. As you’ll see, it’s already available for less than half the RRP.

At the time of writing, despite the iO10 just hitting shelves, you can buy it for 50% off on the official Oral-B shop and retailers will likely have similar, or even cheaper prices if you shop around. You can also buy it from retailers such as Boots and Currys.

Even at £400, this is a pricey bit of kit and will immediately put many potential customers off. If that’s you, and I totally get it, then Oral-B does have some more affordable options: we’d recommend checking out the iO Series 6.

You can find plenty more options in our best electric toothbrushes chart.

In many ways, the iO10 is an excellent electric toothbrush. It’s certainly one of the most technically advanced models on the market right now.

However, Oral-B doesn’t do itself any favours with the £800 RRP, apart from making it look like a relative bargain at £400. Even then, it’s far too expensive for most people.

Some excellent features and performance go a long way to making the iO10 a desirable brush but that price means expectations are understandably high.

When the case is hard to open and doesn’t have USB charging, followed by laggy and sometimes inconsistent tracking from the base – the headline feature no less – it doesn’t feel like the money is justified.

Sure, if you’ve got plenty of cash to splash then this is a luxury toothbrush, but otherwise you’ll find better value elsewhere – including within the iO range.