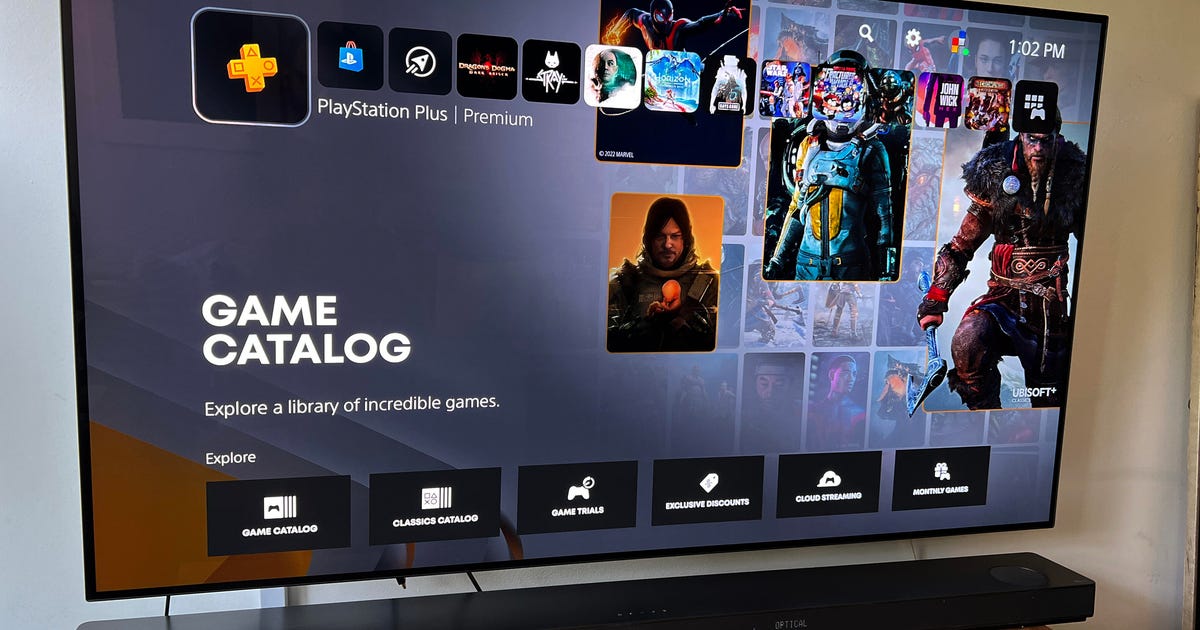 Sony’s PlayStation Plus subscription game service, originally intended to sell online gaming access, went through a big change in June. Still called PS Plus, it has now become Sony’s version of Xbox Game Pass, offering access to a large and evolving Netflix-style catalog of games. While it does some things better than Microsoft, the new PS Plus still lags behind in other aspects of the service.

The new PS Plus offers three subscription tiers, from an Essential package that mimics the old PS Plus, to Extra and Premium tiers offering hundreds of games, cloud streaming, monthly bonus games and online multiplayer access. What it doesn’t offer, however, is a clean interface to make it easy to find games, and it also includes only a few of the biggest Sony games on the PlayStation platform. PS Plus mostly lines up with Xbox Game Pass on paper when you’re going down a list of features. But for overall value and accessibility, it doesn’t always feel like that when actually using it.

PS Plus is a big plus

Before the big update, Sony offered two different PlayStation subscriptions. PS Plus for playing online, with a couple of bonus games every month, was $10. PS Now offered a catalog of mostly older games to download or cloud stream for the same price. The new PS Plus combines the two under a single name and comes in three tiers:

Essential: Same as the original PS Plus, with two or three bonus monthly games, which you keep only as long as you’re an active subscriber; online play; cloud saves; and PSN Store discounts. It costs $10 a month, or $60 a year. (In the UK it’s £7 a month or £70 a year, and in Australia it’s AU$12 or AU$80.)

As for the games available, they’re some of the best on the PlayStation console. This includes Death Stranding Director’s Cut, God of War (2018), Demon’s Souls (the updated 2020 version), Spider-Man: Miles Morales, Red Dead Redemption 2, Control and Marvel’s Guardians of the Galaxy. Those who have the Premium tier will also access classics from older generations, including Dark Cloud 2, Syphon Filter, Tekken 2 and Hot Shots Golf.

Since PS Now included cloud gaming before it was integrated into the new PS Plus, this means game streaming is available from the get go. For Xbox Game Pass, that took years to implement. This means subscribers can play games on their consoles without having to download them or on their PC via the PS Plus app. Some of the classic games are only available to play via streaming, and as long as your internet connection is speedy and stable, there are hardly any noticeable hiccups.

The Xbox Game Pass flavor of cloud gaming, however, lets you play some games on phones and tablets, or laptop web browsers.

The overall PS Plus catalog is larger than Xbox Game Pass, and it offers some unique features. But there are flaws with the service that Sony will need to address if it wants to match the popularity of Microsoft’s service.

PS Plus’ biggest issue is the lack of organization with the catalog of games. There are a few categories games are placed in, but there seems to be little rhyme or reason to it. The Xbox Game Pass user interface is similar to what someone would see on Netflix or Disney Plus, by having some of the more notable games and certain genres easily discoverable. PS Plus, on the other hand, doesn’t have this so it’s just tedious to find something of interest.

Another glaring problem is the overall quality of games. It’s not as though you’d expect all 700 games to be winners, but there are some absolute garbage games seemingly there just to pump up the numbers. This was the biggest issue with PS Now, and it carried over to the new PS Plus. Xbox Game Pass, in comparison, has just over 100 games available, but it seems like the games are of a higher overall average quality than what PS Plus has to offer. Compound the lackluster games on top of the lousy UI and finding a new game to play becomes a bit monotonous.

What makes the catalog issue even more frustrating is the lack of certain Sony-published games. Microsoft made it clear that its games will be available on Xbox Game Pass from launch day, and they will stay on there. It’s been true for Halo Infinite and Forza Horizon 5, and will be for upcoming games like Bethesda’s Starfield.

Sony has yet to do the same with many of its well-known classic games as well as its most recent titles. PS Plus feels like it should include The Last of Us Part 2, Horizon Forbidden West and most of the Gran Turismo titles… but it doesn’t.

There’s also the question of the longevity of the titles. PS Now routinely had titles available for a few months before they were removed, and it’s unclear if PS Plus will do the same.

While cloud streaming is available at launch, there’s a lack of platforms available to stream to. There are no apps for iOS or Android, and the PC app, while it works, reportedly has problems with not being able to launch certain games.

PS4 and PS5 owners who want the absolute most bang for their bucks should subscribe to at least the Extra tier of PS Plus. It’s still a wealth of great games to play at a reasonable monthly price. Fans of some of the older titles could see a reason to jump to the Premier tier in order to play those classic games, while the Essential tier should be avoided, as it makes little sense to not pay the extra $5 a month to access hundreds of games.