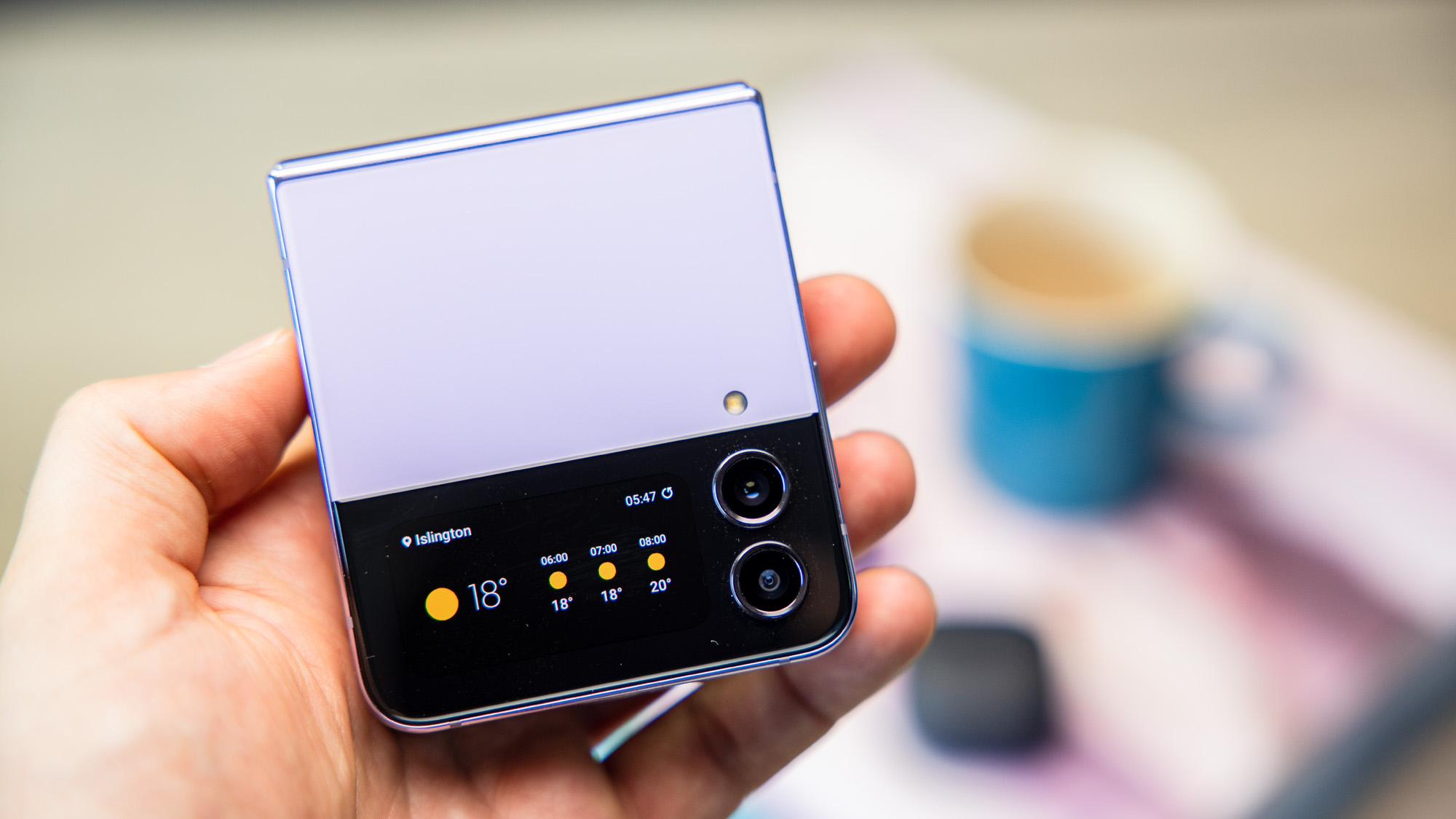 One of the biggest design changes between Samsung’s first-gen Galaxy Z Flip and its wildly successful Z Flip 3 last year was the expansion of the cover screen: the compact display on the outside of the foldable phone.

Samsung almost doubled the size of that extra screen, taking it from a tiny spot for notification alerts to a larger space where you can reply to messages, start phone calls, control your smart home, and even take selfies.­

For some though, it’s still not enough, with fans clamouring for a larger cover screen with space for bigger widgets, a keyboard, or even the option to run full apps. There’s even a popular third-party app, CoverScreen OS, that tries to deliver on that promise with a full app drawer and keyboard crammed into the dinky display.

From the sounds of it, some in Samsung want exactly the same thing.

The condensed, 1.9in outer display is the right choice “for now,” I was told by Yoojin Hong, the executive vice president and head of the UX team at the Mobile Experience business unit of Samsung Electronics, when I spoke to her at this year’s IFA tech conference in Berlin.

Hong explained that the decision to use a tiny display on the first-gen Flip was driven by a desire to help it blend in with the rest of the phone’s design – which is why the larger version only followed once Samsung’s industrial design team had settled on a two-tone finish for the follow-up phone, with space for the screen to blend in seamlessly.

Hong admitted that Samsung has considered a larger cover screen, perhaps one that covers the whole of the phone’s front side, calling the current iteration a “compromise” based on a few factors.

For one, the design consideration is paramount to Samsung, which internally sees the core of the Flip’s appeal being that it allows users to “express yourself” – found most clearly in the new option to set custom images, gifs, and even videos as cover screen wallpapers.

This isn’t a phone where the specs are likely to dictate the design any time soon, and so it will only adopt a larger screen once Samsung finds a design that suits it.

Battery is another key concern, Hong explained, and you can see why. Limited battery life was the biggest flaw in the Z Flip 3, and while this year’s Z Flip 4 improves things somewhat, this still isn’t a phone you’d buy for its longevity. Displays are one of the biggest battery drains around, and a larger outer panel could undo all of Samsung’s hard work optimising the Flip 4 to last longer.

There’s also software support to consider. Foldables are still a new form factor, and apps have to be updated to make the most of them.

For now, the cover screen is limited to Samsung’s own apps and widgets, but it’s hard to see that remaining the case forever.

Samsung will have a harder time persuading third-party developers to bake in cover screen support if it keeps changing the display’s size, proportions, and resolution, so there’s a practical benefit to sticking with the same design for a while. That’s true even for Samsung’s internal dev teams, Hong added, who would struggle just as much to adapt to ever-changing designs.

For the moment, Samsung’s rivals are split. The Huawei P50 Pocket uses a circular outer display, a little smaller than the Flip 3 & 4’s. By contrast the recent Motorola Razr 2022 has a comparatively spacious 2.7in screen, though functionally it doesn’t do much that the Samsung version doesn’t.

No doubt Samsung’s design team will also be feeling smug about their approach compared to Motorola’s, which sees its big display dropped ungainly into the centre of the phone, with a thick, uneven bezel around it.

For my part, I hope Samsung isn’t tempted to change too much, and certainly not for the sake of keeping up with the competition. The Z Flip’s cover screen is svelte and subtle, with enough space for the essentials without distracting from the design.

Just as importantly, it’s changed the way I use my phone – and it has for others too. Samsung says that Flip users in the US use their phone for an average of 3.4 hours a day – compared to 4.7 hours for S21 owners.

No doubt the compact cover screen is key to that improvement in well being, allowing you to scan notifications and choose to ignore them, to leave your phone flipped firmly shut until you really need it.

A larger outer display may sound appealing at first, but at that point the Flip becomes just another phone.