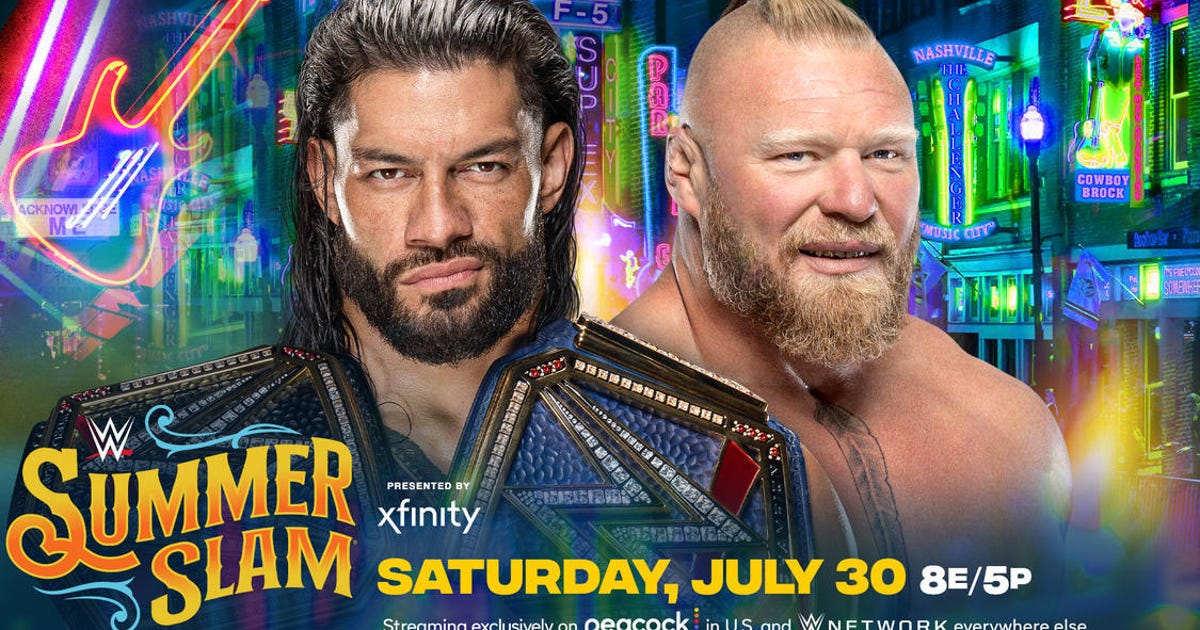 SummerSlam has been kind to Roman Reigns. At the show in 2018, Reigns defeated Brock Lesnar to win the Universal Championship. At SummerSlam 2020, Reigns returned to the ring after five months off to kick off a run that’s seen him reign as world champion for over 700 days. On Saturday, July 30, Reigns hopes to keep that legacy strong as he takes on Brock Lesnar in a Last Man Standing match for the unified WWE and Universal Championship at this year’s SummerSlam.

Lesnar and Reigns have wrestled many times since their first clash at WrestleMania 31, most recently in the main event of WrestleMania 38. But WWE is advertising SummerSlam as their last match ever.

Reigns title is not the only one up for grabs. SummerSlam will also see Liv Morgan defend her SmackDown Women’s Championship against Ronda Rousey, and a rematch between The Usos and The Street Profits for the former’s unified tag team championships.

SummerSlam’s card is still being added to each week on Raw and SmackDown. This article will be updated as new bouts are announced.

WWE SummerSlam takes place at Nashville’s Nissan Stadium on  Saturday, July 30. For those without a live ticket, the show starts at 5 p.m. PT (8 p.m ET). Grappling fans across the pond will have to stay up late, as the show starts at 1 a.m. BST. In Australia, SummerSlam begins at 10 a.m. AEST on Sunday.

How to watch: Peacock, WWE Network

As you probably know by now, Peacock is the new home of WWE’s pay-per-views. The WWE Network has, in essence, migrated to NBC’s Peacock streaming service, and that’s where you’ll go to watch SummerSlam. Peacock has three tiers: Free, Premium and Premium Plus. To watch WWE content, you’ll need a Premium subscription. The good news is, that’ll set you back $5 a month, less than the $10 for WWE Network.

If you’re outside of the US, you’ll watch SummerSlam on the WWE Network as usual.